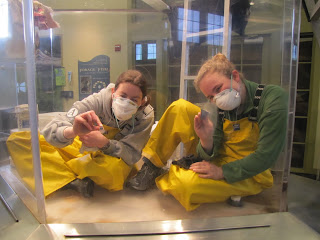 After months of polishing tanks, designing exhibits and collecting
animals, the Marine Exhibit at Fort Worden is finally open!

According to the hard workers at the Port Townsend Marine Science Center, the month of February and the first week of March were spent slowly
buffing scratches out of the inside of the acrylic tanks using 6
different grits of sandpaper and two different liquid grits.

This was a
slow process; each scratch can take up to an hour, depending on its size
and depth. Since these scratches were inside the tanks and weren’t all
at eye level, it took some creativity to get a correct position and a
good view of the scratch.

Learn more about the Exhibit, and schedule a visit over at the Port Townsend Marine Science Center's website.