Tickets are $25; youth 18-and-under are free with a paying adult (use the code word “Centrum”). Reservations can be made through the Triple Door 206.838.4333 between 7 am and 8 pm seven days a week; in person at 216 Union Street, Seattle; and online at http://thetripledoor.com.

Daryl Davis has worked with Elvis Presley’s Jordanaires, B.B. King, Chuck Berry, Percy Sledge, and many others. He was the featured pianist on Cephas & Wiggins’ 1992 Grammy Award winning album, Flip Flop and Fly. In 1985, boogie-woogie pioneer Pinetop Perkins selected Davis to succeed him in the piano and vocal slot of the Muddy Waters Legendary Blues Band. Daryl is the Artistic Director for the Port Townsend Acoustic Blues Festival.

John Miller has had a forty year career as a professional musician thus far, achieving acclaim as a solo and ensemble guitarist, composer and teacher in a variety of styles, including country blues, old-time, jazz and Brazilian. By the time he was 27, John had released five solo albums to international critical acclaim. For the past 15 years, John has continued to perform in a variety of styles, but has returned again and again to the country blues that were his first love, releasing 10 instructional DVDs focusing on that music. Says Miller, ” I’ve come to realize that everything I’ve played has been informed by my early involvement with country blues and the lessons I learned from that music: the primary importance of rhythm and the need to communicate with clarity and strength of purpose.”

Orville Johnson has a gift for finding the secret ingredient that makes a song sound letter-perfect, whether it’s an R&B tune from New Orleans, a country blues or a jazz ballad. He moved to Seattle in 1978, where he was a founding member of the much-loved and well-remembered folk/rock group, the “Dynamic Logs.” Other musical associates include Laura Love, Ranch Romance, and the File’ Gumbo Zydeco Band; and he’s shared the stage with artists such as Doc Watson, Bonnie Raitt and John Lee Hooker. Orville’s guitar, dobro, and quavering, honeyed vocals have been featured on more than a hundred recordings, soundtracks and countless TV and radio commercials.

Arthur Migliazza was born in Hyattsville, Maryland, and began taking classical piano lessons at age nine. Inspired by his immense talent, blues piano luminaries such as Ann Rabson, Mr. B, and the great New Orleans keyboard master Henry Butler have all taken Arthur under their collective wings. In 2005, Arthur was awarded the Tucson Area Music Award for Best Keyboardist, and in 2010 he was inducted into the Arizona Blues Hall of Fame. During the past several years, Arthur has been featured on the Cincinnati Blues Fest’s Arches Piano Stage multiple times, and has taught blues piano at Augusta Blues Week in Elkins, WV, and at Centrum. Del Rey started playing guitar when she was four. At the age of fourteen she was introduced to the world of traditional acoustic music. Lou Curtiss, proprietor of Folk Arts Rare Records and artistic director of the San Diego Folk Festival introduced her to living artists like Sam Chatmon, Lydia Mendoza and Howard Armstrong, and to recordings, especially those of the great blues guitarist Memphis Minnie. Her guitar playing is influenced by country blues, stride piano, classic jazz and hillbilly boogie-all filtered through the sensibility of an autodidact trailer-park aesthete. Thirty years later, when Del Rey became fascinated with the ukulele, she tried to play the same kind of complicated rhythmic blues and ragtime on four strings as she does on six. She expects a lot out of the little instrument, and usually gets it.

With sandy-edged vocals and sparkling guitar, mandolin and banjo picking, Lauren Sheehan plays from an old Songster tradition, combining blues, country, folk, ballads and standards, along with popular as well as her own music. Her shows are unusual for their stylistic breadth and emotional range, masterfully delivered with warmth, humor and passion for the music and its history. Inspired by study with elders, oral tradition and scholarship, Lauren creates the intimacy of a back porch, where singing and playing were regular events. She clearly loves the music she performs, shape shifting through the moods of familiar and the obscure, howling with the werewolf and weeping with the willow. 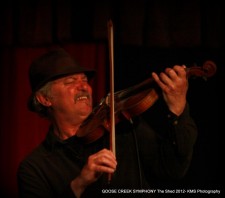 Jon Parry was given classical training on the violin beginning at age seven by his mother Louise and by Walter Sundstein, then assistant concertmaster of the Seattle Symphony. As a child Jon developed a life-long love of the blues playing along with records his father brought home. Son House, Father Earl Hines, John Lee Hooker, and Huddie Ledbetter were some of the artists he immersed himself in as a youth. By the age of 15, he was opening shows for Taj Mahal, Big Mama Thorton, and B.B. King, among others. Jon has performed professionally as a sideman across America, at concert halls, festivals and clubs ranging from The Kennedy Center to the barrooms of New Orleans. He is a long time member of the legendary Goose Creek Symphony. Jon has recorded and performed with artists such as Hank Williams Jr. and Danny Barnes.

Caitlin Romtvedt grew up in a house full of music in Northern Wyoming. She started playing the fiddle with her parents, saxophone in school, and later the guitar. She has lived and played music in Brazil and the Basque Country, spent time studying music in Cuba, and now plays a lot of Brazilian and other Latin American music along with old swing, jazz, and blues. The first time she came to the Port Townsend Acoustic Blues Festival, she fell in love with the music, the people, and the whole world of the blues.

Ben Hunter and Joe Seamons came to the 2012 Acoustic Blues workshop on scholarship. Both are members of the Renegade Stringband, formed in 2010. Banjo frailer Joe Seamons grew up in the woods outside of Rainier, Oregon, where he learned locally composed logging and fishing ballads of the region. Joe studied music at Lewis & Clark College but majored in English. This focus still informs his work as a songwriter for Renegade Stringband. Fiddler Ben Hunter hails from Phoenix, Arizona. His nonprofit, Community Arts Create, is dedicated to building community in southeast Seattle through self-discovery and shared experiences. Ben was trained in classical violin from a young age, and began exploring the world of blues around 2008.

Ricardo is a Seattle-based artist and musician whose work brings together an eclectic blend of music styles and inspirations. His style has evolved from early folk and rhythm-and-blues influences to his recent explorations of instrumental jazz. His recordings, which include the talented contributions of many local Seattle musicians, are creative metaphors from his personal journey and reflect his life-long love of music.