From the archives of the Port Townsend Writers’ Conference, we’re pleased to present a reading by Conference founder Bill Ransom, given at the 1977 Conference. 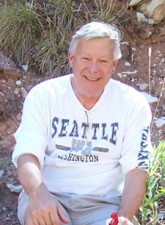 From 1965 to 1970 Ransom worked as an expeditor on a Quick Engine Change team, building and repairing military and commercial jet engines. He studied American Minority Literature and Old and Middle English on an NDEA Title IV fellowship at the University of Nevada, Reno, then began a pilot project with the Poetry in the Schools program in Washington state. He received his MA in English from Utah State University. He founded and directed the popular Port Townsend Writers Conference for Centrum and appeared in two feature films: An Officer and a Gentlemanand The Caine Mutiny Court-Martial (CBS).

He was a firefighter, firefighting basic training instructor, and CPR instructor for six years; and an Advanced Life Support Emergency Medical Technician for ten years in Jefferson County, Washington. He volunteers with humanitarian groups in Central America.

Ransom has published novels, poetry collections, numerous short stories and articles. Learning the Ropes (Utah State University Press), a collection of poetry, short fiction and essays, was billed as “a creative autobiography.” Three of his short stories from this collection have been selections of the PEN/NEA Syndicated Fiction Project. His poetry has been nominated for both the Pulitzer Prize and the National Book Award.