To celebrate Centrum’s 40th Anniversary, as well as our 2013 Gala Dinner and Auction, we asked four Port Townsend visual artists to approach a violin as a canvas. We hoped that at the end of the process, we would be able to showcase a set of uniquely “Centrum” violins that we would offer at the Gala. What we received was so much more. Max Grover, Kim Kopp, Richard Jesse Watson, and Helga Winter are distinctive and incredible artists who made each violin a statement. We are deeply grateful.

Each of these artists has an interesting Centrum connection, and so we asked each of them about their process, their work on the violin, and their own intersection of visual art and music. (Note: Max Grover is on an adventure in Vietnam – we look forward to his return.)

I would imagine a violin is unlike any canvas you’ve worked with before.  Is that so?  How was it working with an instrument? 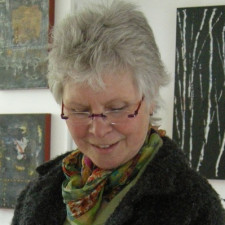 HELGA WINTER: “No, I had not worked with a violin as my canvas before. Similar feelings to destructing and reconstructing books arose: at first a bit of fear, almost like breaking a law; then a sense of freedom to dare to be nontraditional and going against something that might be considered “wrong” by some.”

RICHARD JESSE WATSON: “True. However, my daughter studied violin for years so I have handled and studied them. I first sanded the surface with a super fine grit to make the lacquer  more receptive. And I have painted on three dimensional objects before which takes you to another dimension. Hey it must be the third dimension. Whoah.”

KIM KOPP: “Yes, unlike in a way, however over these last 20 years or so I have worked with three dimensional forms that I have created, often boat or body forms, the violin seemed to fit in.  On sculptural forms I have worked the way that I “paint” —with mixed media, materials defined by subject and form.  Working on a instrument was a new challenge.  I first needed to get over the beauty and purpose, that was complete already in itself.  This required a great deal of looking, holding and listening as well as sketching.  Once I was able to view it as a “canvas” and set aside the notion of preciousness, I was able to begin.”

How did the violin inform your process or inspire you? KIM KOPP: “Working on the violin dovetailed into a project that is currently undergoing a metamorphosis of sorts. For the past several years I have made paintings that exhibit tangled compositions inspired by masses of tangled kelp washed up on the beach. More recently the imagery shifted to tangled bits of string, and began the “string variations” series. Working on an actual violin seemed to make sense given the “string variations” I had already been “composing.” Listening to violin music as I do, it is an inspiration more than the violin itself.”

RICHARD JESSE WATSON: “Any object that has had so much care and love put into the making of it responds to the touch in an unusual way. At first I hated the idea of doing anything to the violin since they are an instrument which has been perfected for hundreds of years. But after caressing the violin, and listening to it, we started a dialogue. Now we are best friends.”

HELGA WINTER: “I chose the prevalent shape of the violin to lead me in my design on the front of the instrument, while I treated its back side like any canvas and ignored the shape. The dots on the front represent musical notes (shape notes influenced me here) – the painting on the back includes paper, words (no longer visible) and color, representing visual arts and creative writing.”

How do you view the relationship between visual art and music? RICHARD JESSE WATSON: “Great question. When I make art I am almost always listening to music. They cross pollinate beautifully. I listen to a wide range of music in any given day. For instance, my day at the studio may start with Gregorian chant, then slide into Ravi Shankar, then some of Bach’s French Suites, then on to Eric Satie for some mind alteration and calming, and toss in a bit of Santana, The Lumineers, and finish off with Gypsy dance music or a Rucinica.”

KIM KOPP: “I listen to music (and some books on CD) when I work in the studio.  I am particularly fond of Flamenco (my husband plays flamenco guitar). I also listen to Classical, single instrument mostly- piano, violin, cello…, and contemporary instrumentals, more rarely vocals.”

HELGA WINTER: “[For me] both are expressions of inner feelings. Sometimes I listen to classical music while I work and that can be inspiring.

What is your connection to Centrum & its work?

HELGA WINTER: “I was an artist in residence in 2010, with life changing results for my career as an artist. I was inspired by gratefulness. I have donated my work for several years to the Centrum Gala Auction, have volunteered, participated in the Artists Residency Program, listened and enjoyed to various programs offered to the public and hosted a Centrum Benefit Event in my studio last year that I will repeat in a couple of years.”

KIM KOPP: “In 2002 I was a Visual Arts Resident in the print studio Building 205.  The work I did during that time largely informs the ways in which I now work.  Many many years ago I was an educator for the High School Arts Intensive Week, teaching watercolor, creative and observation skills with an emphasis on visual language.”

RICHARD JESSE WATSON: “I love everything about Centrum. The arts are a vital part of the care and feeding of the human soul.  Centrum provides so many incredible opportunities for appreciation of the arts  on many levels. I attend as many Centrum events as possible.”