Centrum is honored to welcome the following special artists for its 2015 Chamber Music Workshop. Founded at Yale University in 1999, the Enso String Quartet has, in a decade and a half, risen to the front rank of string ensembles. Described by Strad magazine as “thrilling,” and praised by the Washington Post for its “glorious sonorities,” the Enso has won numerous awards, including top prizes at the Concert Artists Guild competition and the Banff International String Quartet Competition. Apart from a busy touring and teaching schedule, the New York-based quartet has made a number of critically acclaimed recordings for the Naxos label.

The group tours extensively in the U.S. with concerts at Bargemusic in New York, Johns Hopkins in Baltimore, and Philadelphia Chamber Music Society. The Enso regularly performs the classics of the string quartet literature, but also champions lesser-known works that deserve to be heard, along with much contemporary music, including works the Enso has commissioned. The ensemble also performs many of its own transcriptions, including arrangements of 16th Century Renaissance music.

The ensemble gives master classes for the next generation of professional musicians, but also works with enthusiastic amateurs, young and old, and with the autistic, in conjunction with the United Kingdom-based organization Music for Autism.

Based in New York City since 2007, the Enso String Quartet was previously in residence at Rice University in Houston, Texas, and at Northern Illinois University, in DeKalb, Illinois. The ensemble’s name is derived from the Japanese Zen painting of the circle, which represents many things: perfection and imperfection, the moment of chaos that is creation, the emptiness of the void, the endless circle of life, and the fullness of the spirit. Lucinda Carver is a much beloved and highly acclaimed musician equally at home on the podium, at the keyboard or in the lecture hall. As Music Director and Conductor of the Los Angeles Mozart Orchestra for 11 years, Carver garnered critical praise for her stylistic interpretations of music from the Classical era.

As a Fulbright Fellow to Austria, she concertized extensively throughout Europe. Her performances have been broadcast across the United States on National Public Radio, WNYC, WGBH, and locally on KUSC and K-Mozart. In fall of 2009 she was named Artistic Director of the Centrum Port Townsend Chamber Music Festival.

In 1998 she joined the faculty of the USC Thornton School of Music where she is currently Vice Dean of the Division of Classical Performance and a professor of piano, harpsichord, and conducting. Ms. Carver is represented by McAlister Arts. 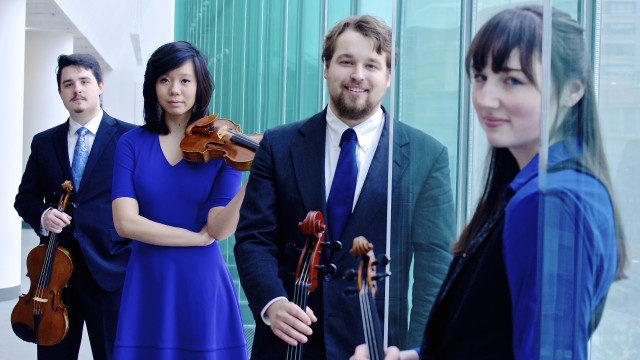 Quartet Ēlektra prides itself on historically informed and transcendent performances of repertoire written between the 1600s and the present. As the string quartet in residence of the World Youth Alliance Organization and Chamber Orchestra, the ensemble has performed in some of the most prestigious venues in the state of New York.

Quartet Elektra has been invited to perform for world renowned artists such as Joseph Lin, Roger Tapping, Earl Carlyss, Paul Neubauer, Michael Brown, and Fred Sherry.  In 2014, the quartet was commissioned for the world premiere of “Filigree” by the young American composer, Aiyana Braun, which was performed in Morse Hall at the Juilliard School. A second commission was awarded by audition to the quartet with the world premiere to be held at Symphony Space in the Spring of 2015. Coached by Dean Adam Meyer of the Juilliard School, Quartet Elektra is the feature ensemble of the New York Youth Symphony Chamber Music Program and currently preparing for its Carnegie Hall debut in May. The Azalea Quartet was formed in August 2013, by four devoted musicians who were all pursuing their undergraduate degrees at the Indiana University Jacobs School of Music. Though from very different backgrounds, Jenna Barghouti, Joy Vucekovich, Ben Wagner, and Graham Cullen have brought their music to life through their common passion for chamber music and their commitment to the highest level of excellence.

A few months after their formation, the Azalea Quartet were invited to compete at the Fischoff National Chamber Music Competition in May 2014. They received a semi-finalist status. In October 2014, Azalea were named the Kuttner Quartet-in-residence at the Jacobs School of Music. They also won the Beethoven-Haus Residency Competition, held annually by the Jacobs School of Music. They will travel to Bonn, Germany in March 2015, where they will give performances and receive multiple coachings by distinguished scholars on the life and works of Beethoven. Pianist Pauline Yang began her piano studies at the age of five and won her first international competition at the age of seven in Washington, DC. In March of 1998, at the age of eleven, Ms. Yang made both her Philadelphia Orchestra debut as well as her solo recital debut at Carnegie Hall.

In the same year, Ms. Yang entered The Juilliard School, where she won both the Pre-College’s concerto and scholarship competitions in her first year. She has also studied and performed at a number of international music festivals, including the Warsaw Piano Workshop in Poland, International Holland Music Sessions in The Netherlands, Casalmaggiore Music Festival in Italy, Klaviersommerfest in Germany, the Orford International Academy in Canada, and several others.

Her solo and chamber music appearances have taken her throughout North and South America, Europe, and Asia. Highlights have included performances with Lynn Harrell and Itzhak Perlman, the selection of her trio to perform in a series of master classes with Leon Fleisher, Pamela Frank and Yo-Yo Ma at the Professional Training Workshop at Carnegie Hall on the Chamber Music of Brahms, and appearances at the Casals Festival in Puerto Rico.

During her undergraduate studies at the University of Southern California (USC), she was a double-major in piano performance and political science, graduating Phi Beta Kappa, magna cum laude and as a Renaissance Scholar. She received her masters in piano performance from USC and is currently pursuing a masters in international relations at The Fletcher School of Law and Diplomacy at Tufts University where she is focusing on transatlantic cultural diplomacy. She has interned for Hillary Clinton in New York, for U.S. Representative Rush Holt on Capitol Hill, and at the Ministry of Foreign Affairs and Government Information Office in Taiwan where she researched Taiwan’s cultural diplomacy efforts.

Ms. Yang was one of Glamour Magazine’s 2008 Top Ten College Women of the Year. A native of Southern California, Alin Melik-Adamyan began her piano studies at the age of four and has since captivated audiences as soloist and chamber musician throughout the United States, Armenia, and Germany.

For fifteen years, she had been a recipient of an annual scholarship for piano study from the Young Musicians Foundation. She also received scholarships from the Women’s Committee of the Glendale Symphony Orchestra, the Glendale Piano Competition and the Memorial Music Scholarship Foundation sponsored by Glendale Branch, MTAC.

In June 2008, Alin was the Grand Prize Winner of the YMF/ASCAP Leiber & Stoller $10,000 Scholarship and immediately continued her success with her first prize at the 2008 Los Angeles Liszt International Competition. In the following year, she won the William Grant Still Young Artists Competition and was invited back in 2010 and 2011 to serve as a guest judge for that competition. Alin also made her debut at the Redlands Bowl in 2012 as the Grand Prize winner of their Young Artist competition. Most recently, she won the 2014 MTNA State Piano Competition.

Alin holds both Bachelor and Master of Music Degrees in Piano Performance from the USC Thornton School of Music. She is currently an Assistant Lecturer of Keyboard Studies at USC and is pursuing a Doctorate in Keyboard Collaborative Arts, studying with Professor Kevin Fitz-Gerald.