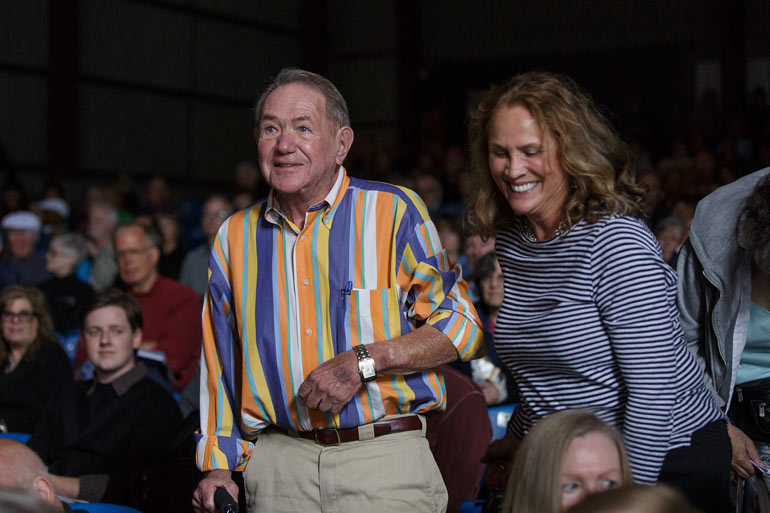 Port Townsend community leader Gary Kennedy was awarded the honor of being the Centrum Foundation’s first-ever “Centrum Champion” during the 2015 summer music festivals at Fort Worden State Park. Each year, Centrum will select a most deserving community volunteer, advocate, musician or artist to receive the award, and a commemorative plaque will be added, for display, in the McCurdy Pavilion. In announcing this award at the matinee performance of 2015 Jazz Port Townsend, Centrum executive director Rob Birman stated, “Gary Kennedy has gone above and beyond the call to support Centrum, its mission and programming throughout the years. He is a model citizen who supports a great many charities. Gary works quietly and generously to make our community a better place. The Centrum board and staff want to recognize those countless contributions by naming Gary our inaugural ‘Centrum Champion’ for 2015.”

Gary and his late partner, Jerry Haynes, began a tradition in 2001 of hosting Centrum’s summer kick-off party – a fundraising dinner in their home to support scholarship assistance for artists in need. Since that time, he has helped raise countless dollars to support Centrum’s programming and week-long residential workshops in the arts. After the passing of Mr. Haynes, Gary and the late Frank Dameron generously carried forward this tradition. Today it continues with the help of Rodney Rochelle, one of Gary’s friends and neighbor in the North Beach community of Port Townsend.

An architect and designer, Mr. Kennedy first came to Port Townsend in 1973 – the year before Centrum was founded. He eventually settled here permanently in 1997. He lives in one of the oldest homes in North Beach and makes his home available for non-profit organizations many times each year. “Gary is the consummate host,” says Birman. “He is among the most generous citizens of our time.”

Mr. Kennedy is active in supporting a great many charities in our community. He is a veteran of the Korean War, and active as a supporter of Habitat for Humanity, the Northwest Maritime Center, and is on the Advisory Board of Centrum.