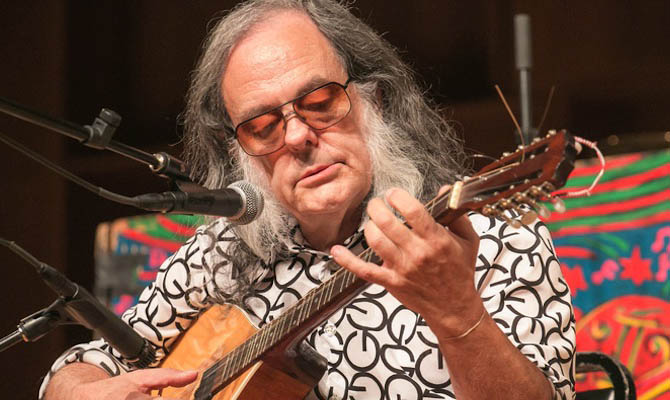 Multi-instrumentalist David Lindley will perform at the Joseph F. Wheeler Theater in Port Townsend at 7:30 on Wednesday evening, March 2, 2016. Lindley will perform solo, but don’t let that fool you – he will have many of his closest “friends” on stage, bringing along an incredible array of stringed instruments including the Kona and Weissenborn Hawaiian lap steel guitar, the Turkish say and chumbus, as well as the Middle Eastern oud and Irish bouzouki. This will be Lindley’s first appearance on the Olympic Peninsula in six years.

Lindley will perform one show only at 7:30 pm. Tickets are available at Crossroads Music and Quimper Sound in Port Townsend or online from Brown Paper Tickets at http://www.brownpapertickets.com/event/2506062. 10% of the proceeds from this event will be donated to Centrum to support its programs and scholarship fund.  For additional information, contact Everett Moran at Rainshadow Recording via email (centrumrecording@gmail.com) or by phone at (360) 385-5665.

If you don’t know Lindley by name, you certainly have heard his signature lap steel and fiddle in musical partnership with his good friend, Jackson Browne, all but defining the sound of the latter’s most influential records, including For Everyman, Late For the Sky, The Pretender, and Running On Empty. Oh, and that spot on reproduction of Maurice Williams’ falsetto on Browne’s cover of the hit, “[Oh, Won’t You] Stay…?,” yep, that’s Lindley as well! Lindley and Browne reunited in 2006 with a tour of Spain. A 2-CD live recording, Love is Strange – En Vivo Con Tino, was released in 2011, earning the dynamic duo a Grammy nomination for Best Contemporary Folk Album.

David Lindley has long championed the concept of world music, performing in a style that brings new meaning to the word “eclectic.” The David Lindley electro-acoustic performance effortlessly combines American folk, blues, and bluegrass traditions with elements from African, Arabic, Asian,  Celtic, Malagasy, and Turkish musical sources.  His collaborations with Ry Cooder, Henry Kaiser  and Hani Naser have resulted in the release of a collective 14 albums, in addition to his extensive work on multiple albums  by Crosby, Stills and Nash, Warren Zevon, Rod Stewart, Bob Dylan, and Linda Ronstadt to name just a few.