It is going to be a *very* fun year at the Festival of American Fiddle Tunes.  We’re excited to welcome Alicia Svigals to the Festival in 2016.

Alicia Svigals is the world’s leading klezmer fiddler, a founder of the Grammy-winning Klezmatics who she co-led for seventeen years, and a composer who was selected to be a 2014 MacDowell Fellow.   She has played with and composed for violinist Itzhak Perlman, the Kronos Quartet, playwrights Tony Kushner and  Eve Ensler, the late poet Allen Ginsburg, Robert Plant and Jimmy Page of Led Zeppelin, singer/songwriter Debbie Friedman, Avraham Fried, singer/songwriters Diane Birch, Gary Lucas and Najma Akhtar, and many others. She has appeared on David Letterman, MTV, PBS’ Great Performances, NPR’s Prairie Home Companion, Weekend Edition and New Sounds, and on the soundtrack for the L-Word. 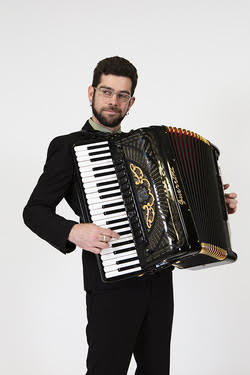 Svigals is the recipient of the Foundation for Jewish Culture’s 2013 New Jewish Culture Network commission for her new score to the 1918 Pola Negri silent movie The Yellow Ticket.  She is currently touring this multimedia event, in which she and pianist Marilyn Lerner perform live to screenings of the film.

Accompanying Alicia will be Patrick Farrell, an accordionist, composer and bandleader based in Brooklyn, NY who has been described as a “wizard” (Feast of Music) and as a player of “mordant wit and blistering speed” (Lucid Culture).

He is an integral part of the international klezmer community, plays with “new music” and improvisational groups, and enthusiastically toots on an alto horn in various brass bands.

Farrell has appeared on over 35 recordings, most recently with Yo-Yo Ma and the Silk Road Ensemble and Ljova and the Kontraband, and also enjoys working with dance and theater ensembles as a composer, music director and accompanist.