Centrum is pleased to welcome Jane Chu, chair of the National Endowment for the Arts (NEA), along with U.S. Rep. Derek Kilmer and Executive Director of the ArtsWA Karen Hanan on Tuesday, February 16, 2016 to learn more about Centrum and its partnership with area schools, and to tour Fort Worden. 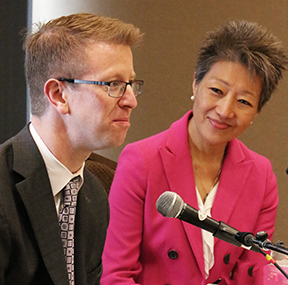 Chu is the 11th chair of the National Endowment for the Arts. With a background in arts administration and philanthropy, Chu is also an accomplished artist and musician.

“We have an opportunity to start a new dialogue on the ways in which the arts – and the ways the NEA supports the arts – are an essential component of our everyday lives,” Chu said in a press release. “Although many may not realize it, the arts actively intersect with areas such as the economy, human development and community vitality. The arts and artists who are funded and supported by the NEA are an integral part of the solution to the challenges we face in all parts of our society.”

Kilmer was re-elected to a second term in the U.S. House of Representatives in 2014 and was chosen by his Democratic colleagues to serve on the House Appropriations Committee. He also serves on the Interior and Environment Subcommittee and Commerce, Justice, and Science Subcommittee.

The group will hear a presentation of “Tales, Texts and Theater,” a program presented through a collaboration with Centrum, ArtsWA and Port Townsend’s Blue Heron School. They are to visit Copper Canyon Press and tour Fort Worden to learn more about the 20-year vision for the development of the Fort Worden campus under the Fort Worden Public Development Authority.