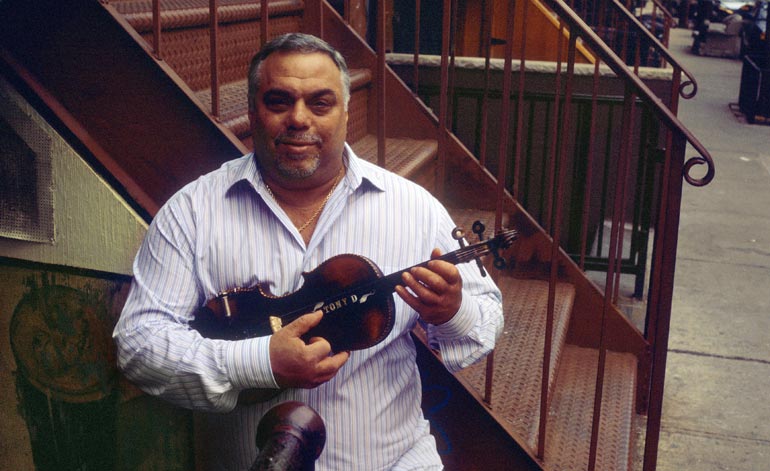 Tony Demarco. Irish fiddler. If that sounds slightly off, you have only to listen to his playing to be cured of any preconceptions about the importance of ethnic purity in traditional music. There may have been a time when Irish music in New York City was played exclusively by Irish immigrants and their offspring, while their Italian neighbors strummed mandolins and sang opera. But the Big Apple really is a melting pot, at least for some of its disparate immigrant elements. Before World War II it really wasn’t very common for Italian and Irish Americans to marry each other. By the 1950s, however, this kind of ethnic mixing was fairly normal in Tony’s native Brooklyn, where the Italians and Irish lived side by side and attended the same parish churches.

Tony never grew up with the competitive Irish Comhaltas scene—he came through the hippie scene, the folkie scene. He tells the story of how he took up the fiddle and discovered Irish music, but it is worth repeating here that his first exposure to Irish traditional music was through a Folkways recording of the County Sligo fiddler Michael Coleman. Tony had many other musical influences before this, and would have many more afterward, but for him the appeal of the Sligo fiddle style will never fade.

We’re thrilled to have Tony Demarco with us at the 40th Gathering of the Festival of American Fiddle Tunes – hope you can join us in 2016!