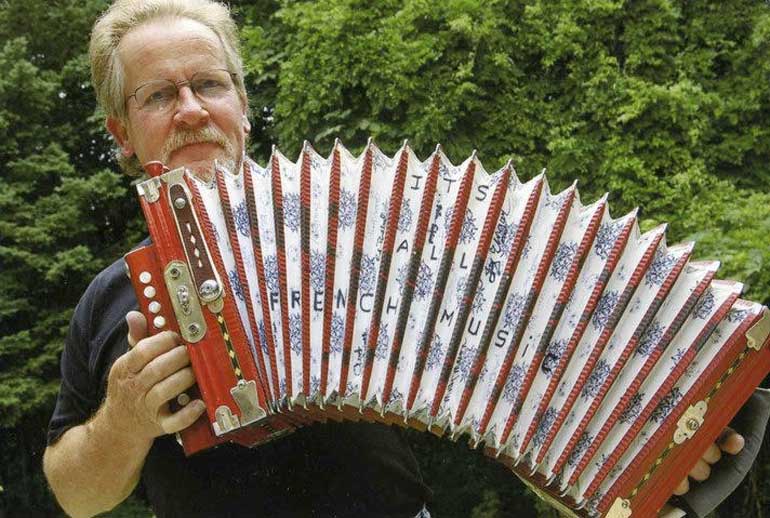 The Festival of American Fiddle Tunes has added Cajun accordion master Jesse Lege, to the workshop faculty for the 40th gathering, July 3-10, 2016.

When you think of Jesse Lege, you might think of the accordion, or his tattoo, or his ability to skin a chicken in one piece, or how hard he works, or the way he can play longer and farther than anyone you’ve ever seen. And his high and soulful singing.

Jesse grew up with eight siblings in Gueydan, Louisiana, in a one room house with no electricity. They had a battery-powered radio, where Jesse first heard some of his greatest influences: Améde Ardoin, Lawrence Walker, Améde Breaux, and Austin Pitre. The family saved their batteries for Friday and Saturday nights, for Louisiana Hayride, Grand Ole Opry, and boxing events. When Jesse was fourteen, they moved into a new house with electricity and an indoor bathroom. “We had made it to the modern world,” Jesse recalls. “So much changed from that very night, but so much stayed the same and still is with me today.”

Jesse started out learning the guitar and harmonica, but by the age of fifteen his father’s cousin loaned him an accordion, and without anyone around to teach him he taught himself to play. He’s played in many bands and with many people over the decades, and has been nominee and winner of numerous CFMA (Cajun French Music Association) awards, often referred to as the Cajun Grammys: Traditional Band of the Year, Accordion Player of the Year, Male Vocalist of the Year, Band of the Year, Song of the Year (for “Memoires Dans Mon Coeur”). In 1998 he was inducted into the Cajun Music Hall of Fame. His mission: bring foot-stompin’ Cajun music to the world, one dance hall at a time.