In recognition of the 40th Anniversary of the Festival of American Fiddle Tunes, Centrum board president Carla Main, executive director Robert Birman and Fiddle Tunes’ Artistic Director Suzy Thompson are pleased to announce the creation of a permanently-restricted endowment fund for Centrum, named in perpetuity in honor of Peter McCracken, longstanding Program Manager at Centrum.

The goal for the fund is $1 million with proceeds to support the presentation and preservation of traditional and folk music genres at Centrum. The fund will support faculty, guest artists, workshop, concert planning and production, travel, lodging, and scholarship funds associated with Centrum programs featuring traditional and folk music genres such as Fiddle Tunes, Voice Works, the Port Townsend Acoustic Blues Festival, Kitchen Culture, and others. Centrum Board member, Edmund Littlefield, Jr. and his wife, Laura, have provided a lead gift of $500,000 to initiate the fund. Littlefield joined Festival of American Fiddle Tunes Artistic Director Suzy Thompson and Centrum Executive Director Robert Birman, on stage at Fiddle Tunes on July 4th with the announcement – as a surprise to Peter on the occasion of the 40th gathering of the workshop. Centrum will seek to secure a 1:1 match for the lead pledge within one year, thereby establishing the beginnings of a meaningful endowment for Centrum and its future.

“Centrum programs like Fiddle Tunes and The Port Townsend Acoustic Blues Festival have been changing people’s lives for generations— not just the folks who enroll in the programs, but many faculty members as well,” said Artistic Director Suzy Thompson. “The Littlefield’s generosity will help these unique programs continue to serve for future generations and that is an extraordinary gift to us all. For Peter, this work is not just a job, it is a calling. When, together, we explore the folkways of other cultures, we get a taste of what makes them tick, and get a little closer to understanding the ‘other’.”

In tandem with the announcement, the Centrum Board of Directors has named Peter McCracken as its 2016 “Centrum Champion,” an award established last year in recognition of outstanding leadership, volunteerism, contributions or stewardship of Centrum programs and its mission. Centrum Champions are recognized with a commemorative metal plaque installed in the McCurdy Pavilion on a new wall-of-honor. 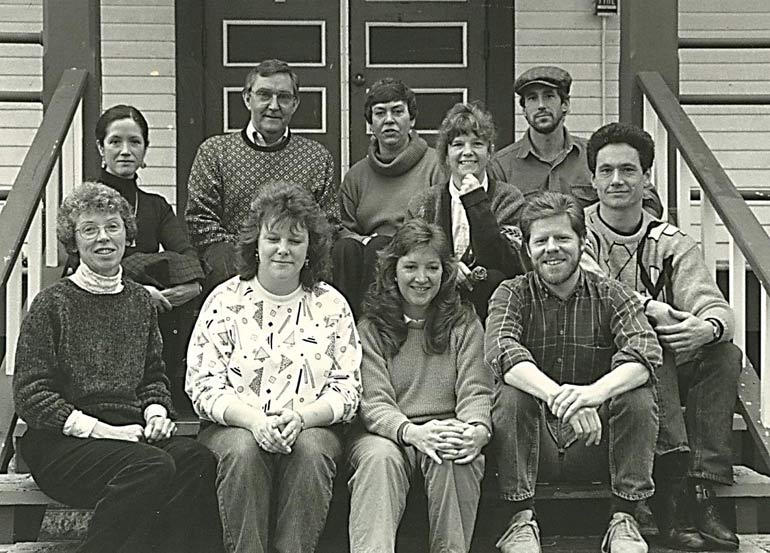 Peter McCracken took the helm of the Festival of American Fiddle Tunes as Program Manager in October of 1987, beginning his tenure at Centrum, a non-profit arts organization in Port Townsend, WA. At Centrum, a community of musicians from around the country comes together for weeklong workshops with masters of traditional genres, culminating in widely attended public concerts. Under McCracken’s leadership, the Fiddle Tunes Festival and others he has managed have brought thousands of tradition bearers from around the world to Port Townsend, and they have shared their music and culture with tens of thousands of participants and audience members.

Other festivals conceived and managed by Peter McCracken presenting roots music at Centrum include the International Folk Dance Festival, Hot Jazz, the Roots of Rock, Voice Works, Slide & Steel, and 21 years of the Port Townsend Acoustic Blues Festival. In addition, Peter spent two summers touring remote towns of the Northwest with Centrum’s circus tent and a crew of musicians and staff, presenting “Masters of Traditional Music” in communities that otherwise had virtually no access to such music.

When he started Centrum’s Acoustic Blues Festival in 1992, there were few gatherings focused on this tradition. McCracken guided the integrity and vision of the festival as a comprehensive 24-hour-a-day artistic and social environment. Although many of the elders brought by McCracken to the Festival have now passed, much of their music, stories, and traditions have been handed down. Through Peter’s work and dedication, these workshops and performances have reached thousands of musicians and audience members, passing on the tradition so that generations to come will appreciate and play the music of their forebears.

Folk Alliance Region-West (FAR-West) announced in June that Peter McCracken and Centrum, along with legendary songwriter/performer Danny O’Keefe are the recipients of its “Best of the West Awards” for 2016. The Best of the West awards were established by FAR-West in 2005 to honor individuals who have maintained an enduring presence in the folk and acoustic music scene in the West, and who continue to inspire others by embodying folk values and traditions. This year’s awards will be presented in October at FAR-West’s annual conference in Bellevue, WA.