Front yard “free” piles will become sculpture fodder and sea breezes will catalyze creative inspiration as six diverse artists move into Fort Worden this month and prepare for an open studio event set for Sunday, October 23, from noon to 4:30 p.m. in Building 205.

“I’m guided by what I find,” Satpreet Kahlon, 27, of Seattle, said of how she develops inspiration for her art, which she describes as “multidisciplinary conceptual.”

Kahlon and her colleagues are this year’s crop of Emerging Artist Residents, who receive housing, studio space and a stipend from Centrum.

The artists moved into the fort’s historic buildings on Monday, October 3 and by Friday Kahlon had discovered discarded wood scraps and old fishing line. She used the twine to weave rice noodles into the beginnings of a project visitors might see Sunday. 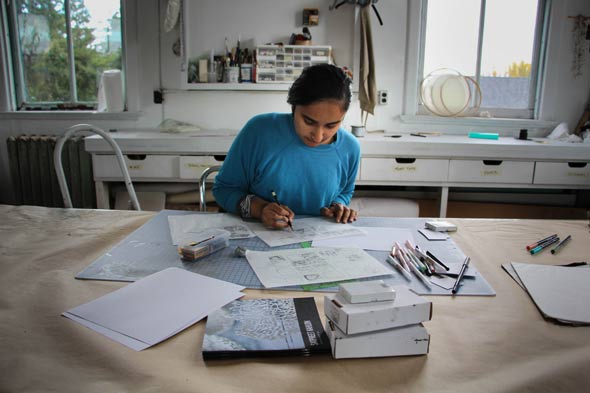 Multidisciplinary conceptual artist Satpreet Kahlon works on some sketches in her studio in Fort Worden’s Building 205.

“I’ve been researching traditional textile-making techniques from different parts of the world that depend on rice as a food staple. Now, I’m using rice to make textiles.” Kahlon, who was born in Punjab, India, said.

Visual artist Ka’ila Farrell Smith, 34, of Portland, also incorporates indigenous textiles into her work. Smith is of the Klamath Modoc tribe and she intends to finish four abstract paintings and create prints that contain Klamath basket-weaving designs. Smith said her Centrum studio gives her space to work she does not have at home.

“I love being near the water and biking into town,” Smith said. “It’s super beautiful.” 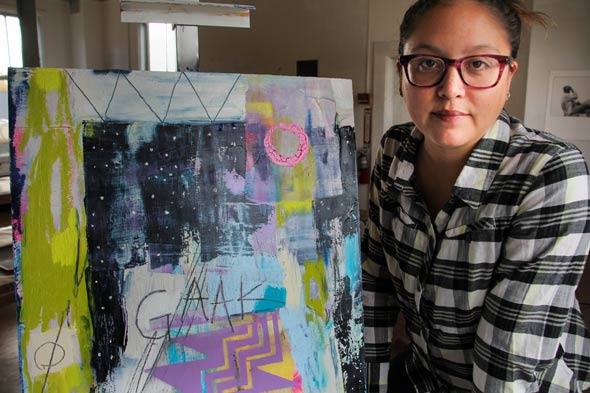 Photographer Zorn B. Taylor (pictured above), 54, of Seattle, has been inspired by different aspects of his studio surroundings.

“This was once a segregated army base,” Taylor said of Fort Worden. “I want to talk about being brown in this space that was previously off-limits to me, that shouldn’t have been off-limits.”

That discussion is one Zorn said he hoped would be critical of prejudice in all forms.

“I watch the [presidential] debates and I see two people talking about demographic groups,” Zorn said. “I’m going, ‘Man, that is so missing the point.’  If I was born here, then I’m here, of this culture. I’m not about preconceived notions. I’m very much human. You don’t get shortcuts. You don’t get ‘African American.’ You don’t get ‘Black.’ You get, ‘I’m Zorn.’ I’d like to meet other people in the same way.”

Interdisciplinary artist and 2014 Goddard College graduate Storme Webber, of Seattle, has Aleut, Choctaw and African-American ancestry. She said her work “restores lost voices to the grand narrative of the City of Seattle.”

“I notice more and more that who controls the narrative wields a great deal of power,” Webber said. “There’s a reason why certain voices are often, or always, left out.” Interdisciplinary artist Storme Webber takes in the view from one of Fort Worden’s beaches beside a driftwood structure another visitor assembled and left behind.

Those left-out voices are those of “marginalized” people, Webber said, such as those of the community she grew up in, which she described as “a black and native, multicultural, poor and working class community of lesbians and gay men.”

Webber is expressing those voices through multiple disciplines, inspired by the “culture marginalized people create.”

“[At the open studio] there will be collages, prints, live music, spoken word and poetry— and there may be some other surprises in there, too,” she said.

For painter and writer Antonia Pinter, 28, a Vashon Island native, a feeling of coming home was one reason she looked forward to her residency at Centrum. She also sought respite from her duties as co-owner of Publication Studio in Portland.

“My job takes the majority of my creative energy,” Pinter said. “It feels homey and relaxing here and it’s a perfect place to restart my own practice.” 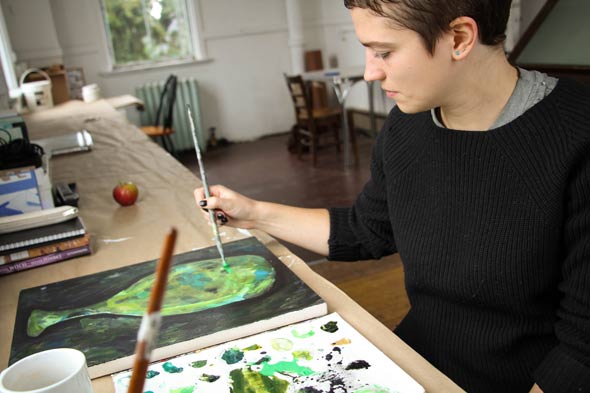 Painter and writer Antonia Pinter picks up a brush in her studio in Fort Worden’s Building 205.

Photographer and organic farmer Nolan Calisch, 32, of Portland, said his residency will be the longest amount of time he has spent away from his farm since he started it 10 years ago.

“Any artist would benefit from a gift of space and time and solitude,” Calisch said. “Whenever I go to a new place, I try to really get a deep sense of it and I do that through long walks, research, and talking with local people. I’m challenging myself to make some work that grows out of my relationship with this place.” The Centrum Open Studio event begins in Fort Worden’s Building 205 and continues into the Schoolhouse building.