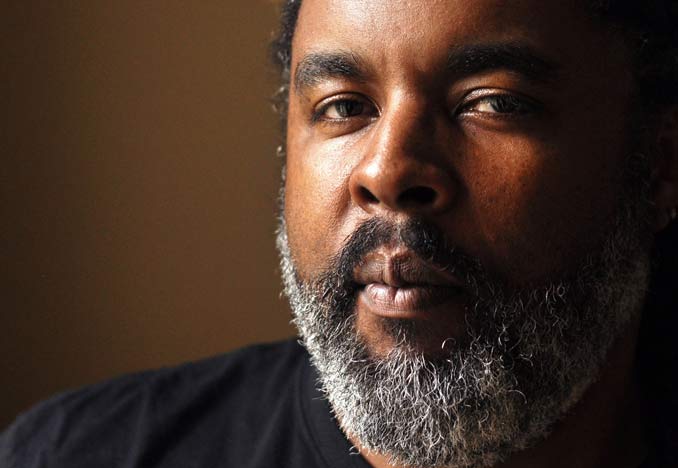 Centrum is pleased to announce that blues master Alvin Youngblood Hart will be part of the 2017 artist faculty of the Port Townsend Acoustic Blues Workshop, July 30-August 6.

Alvin Youngblood Hart creates a blurred line of Blues, Roots, Country and Rock music that has been enjoyed in our culture for decades.  In the summer of 1999 found Hart teamed up with celebrated producer Jim Dickinson to begin recording START WITH THE SOUL, a record hailed as a new-breed Southern Rock classic and one that piloted Hart’s return to the “sacred garage.” START WITH THE SOUL was chosen by the New York Times as one of the top 10 releases of 2000, as well as the BBC’s Blues Record of the Year.

In the summer of 2005, fortified in the wake of much recognition and determined to defy any stereotypes attached to his artistry, Hart released the self-produced (and personal favorite) MOTIVATIONAL SPEAKER a rock guitar free-for-all, paying homage to fallen and missing rockers like Phil Lynott and Sly Stone. Hart’s songwriting, singing and electric guitar prowess are all championed on this project and showcase the versatility he continuously strives to offer his fans and profession.

In 2006, Hart collaborated with several Memphis area musicians in the Craig Brewer cult hit film “Black Snake Moan” by both serving as a guitar tutor to the film’s leading actor, Samuel L. Jackson, and recording a duet with the film’s female lead, Christina Ricci, for the film’s riveting soundtrack.

In the fall of 2006, Hart was invited to hit the road for two months with Rock-n-Roll legend Bo Diddley for what turned out to be Diddley’s final coast to coast tour. Hart then joined fellow notable string playing colleagues Corey Harris, Don Vappie, Keb Mo and Guy Davis and contributed to the uniquely progressive 2007 OtisTaylor record RECAPTURING THE BANJO.

A personal career highlight occurred in the summer of 2008 when Hart met the late Irish guitar legend Gary Moore. Moore invited Hart, a lifelong Thin Lizzy fan, onstage to jam with himself and original Thin Lizzy drummer, Brian Downey. In the Spring of 2009 Moore requested Hart’s band as the opening act on a tour of Germany. Moore was seen offstage most every night with friends, cheering Hart’s band along during their set.

In 2010 Hart joined forces with friends Luther Dickinson (North Mississippi Allstars, Black Crowes) and Jimbo Mathus (Squirrel Nut Zippers, Tri-State Coalition) to form “The South Memphis String Band”. The fun-loving and regaling trio was quickly dubbed by the media as an “acoustic super group”. Recorded in a borrowed radio station studio while the band was on its first road trip, their debut record HOME SWEET HOME was received with rabid enthusiasm. The 2011 Blues Music Awards (The Blues Foundation) nominated the record for “Best Acoustic Album”. The group released a second album in the spring of 2012. A third record is in the making.