Rainshadow Recording Studio is hosting a concert featuring past Port Townsend Acoustic Blues faculty Orville Johnson and Grant Dermody on Saturday, February 11, 2017 from 8-10 p.m. Tickets are $15 and are for sale online. The studio is located in Building 315 at Fort Worden, and Rainshadow will donate 10 percent of ticket sales to Centrum.

Note: this concert originally featured Rich DelGrosso. Rich has unfortunately had to cancel due to illness. Thanks to Orville for stepping in!

Orville Johnson was born and raised in the southern Illinois heartland. He acquired his love of singing as a youth in the fundamentalist Pentecostal church he attended and, when he later began playing guitar and dobro, responded to the roots music that surrounded him by learning to play the blues, bluegrass, rockabilly, and country music that are all part of the mosaic that characterizes his own mongrel music.

He is a singer, instrumentalist, record producer, songwriter, session player, teacher, the top dobro player on the West Coast of America and, above all, an instinctive and sensitive musician. As his entry in the Encyclopedia of Northwest Music (Sasquatch Press 1999) states, he has become a vital figure on the NW music scene in the thirty-some years he’s lived there, appearing on over 400 CDs, movie and video soundtracks, commercials, producing 22 CDs for other artists, hosting a roots music radio show, and appearing in the 1997 film Georgia with Jennifer Jason-Leigh and Mare Winningham, on the Prairie Home Companion radio show and on Jay Leno’s Tonight Show.

Orville is also known as a patient and insightful teacher of music and has taught often at the Puget Sound Guitar Workshop as well as the International Guitar Seminar, Pt. Townsend Blues Workshop, Euro-Blues Workshop, B.C. Bluegrass Workshop and others. He has several teaching videos and DVDs and CDs of his own music available. 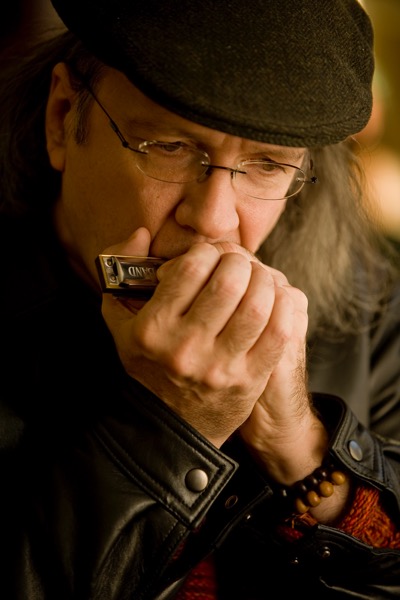 Grant Dermody is a harmonica player, singer, songwriter, and teacher from Seattle, Washington. No Depression magazines Joe McSpadden called him a harp wizard with a panoramic view of roots music styles, both old world and new and indeed, there is magic in what he makes.

Grants musical travels have seen him playing with many of Americas most celebrated acoustic musicians. Since 2006, hes toured in the US and Europe and recorded five albums with guitarist Eric Bibb. He also performs live in a trio with Orville Johnson and John Miller, releasing two albums in the process: Deceiving Blues (2006) and 2011s We Heard the Voice of a Porkchop. In addition, Dermody has performed with folk icon Leon Bib and blues legends Honeyboy Edwards, Robert Lowery, Big Joe Duskin, John Dee Holeman, and John Cephas. Guitar maestro Frank Fotusky also continues to be a touring co-conspirator.

Grant’s latest recording, Sun Might Shine on Me, marks a long-awaited encore to 2010s masterful Lay Down My Burden. He made a pilgrimage from his native Seattle to Breaux Bridge, Louisiana to capture its 15 tracks, recording with a handpicked band at the studio of revered roots musician Dirk Powell. Powell both played on the record, while engineering and mixing as well. Featuring Grant’s own compositions along with classics from the Americana songbook, this new disc is no less than a quest one that connects directly with the sonic soul of the land. Employing a phenomenal lineup of 26 guest stars including many of the blues elder statesmen Sun might Shine on Me intertwines original songs and timeless covers, a set that displays his pioneering approach alongside of his commitment to the timeless traditions of the blues. As the scholar and musician Kim Field says of this latest release, Grant Dermody takes his place in the front ranks of American roots-music performers.