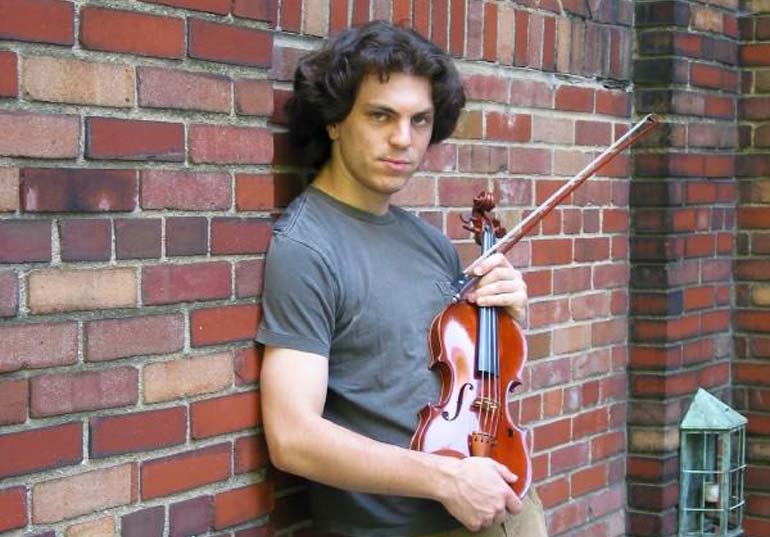 Klezmer musicians take note – we have just added Jake Shulman-Ment and Pete Rushefsky to the 2017 faculty at Fiddle Tunes. They will be joining Michael Alpert, leading klezmer workshops and band labs, making this is a great year to dig deep into klezmer  music.

Jake (pictured above) is among the most highly regarded klezmer musicians performing today. He tours and records internationally as a soloist, and with Daniel Kahn and the Painted Bird, Di Naye Kapelye, The Brothers Nazaroff, Pete Rushefsky, Frank London, Sanda Weigl, Joey Weisenberg, and many, many more. Jake first began playing violin at the age of 3. He began studies in klezmer from age 12, initially a protégé of Alicia Svigals. Jake later immersed himself in related violin traditions, living in Greece, Hungary, and Romania for extended periods, becoming fluent in both the musical and spoken languages. Pete Rushefsky is a leading performer, composer and researcher of the Jewish tsimbl (cimbalom or hammered dulcimer). Rushefsky tours and records internationally with violinist Itzhak Perlman as part of the Klezmer Conservatory Band, and collaborates with a number of leading figures in the contemporary klezmer scene.

Since 2006 Pete has served as Executive Director of the Center for Traditional Music and Dance, the nation’s leading organization dedicated to the preservation and presentation of diverse immigrant music traditions from around the world, and is on the Organizing Committee of Yiddish New York. He curated the Yiddish program at the 2013 Smithsonian Folklife Festival, and has performed on PBS, NPR, and France’s Radio One.

Despite being featured at such venues as Carnegie Hall, the Hollywood Bowl, Lincoln Center, the Kennedy Center, and the Amsterdam Concertgebouw, he’d probably rather be jamming with you at Fort Worden late at night.