Get your dancing shoes on for an evening of fine music and people. Right outside the giant doors of Fort Worden’s McCurdy Pavilion, we’ll start the evening with a top-notch square dance, and close it out with Cajun music, straight from Louisiana!

The Foghorn Stringband is the present day gold standard for real-deal hard-hitting genuine old-time American string band music, with eight albums, thousands of shows, over 15 years of touring under their belts, and an entirely new generation of roots musicians following their lead.

American roots music is a diverse and never-ending well of inspiration, and Foghorn Stringband continually and obsessively draws from old-time, bluegrass, classic country, and Cajun music traditions in an ongoing quest to present a broad span of American historical music with an unparalleled youthful energy, joy, and virtuosity.

The Foghorn Stringband is comprised four master performers and historians:

Each member of Foghorn Stringband exemplifies the best of the roots music traditions from their respective native cultures. Caleb Klauder’s wistful, keening vocals and rapidfire mandolin picking are as influenced by Southern roots music as much as they are by his upbringing in the sea islands of coastal Washington State. Reeb Willms hails from the wind swept Eastern farmlands of Washington. Her musical family and rural upbringing are are on display with every note she sings and every heart she breaks. Nadine Landry’s roots lie in the rural backroads of Acadian Québec, and her high lonesome vocals have delighted audiences the world over. Her earth-shaking bass playing is the rumbling backbone of the Foghorn sound. Minnesotan Stephen ‘Sammy’ Lind, simply put, is the old-time fiddler of his generation whose tone and voice are as old as the same hills that gave birth to this music. Together, these four have forged a sound like no other. 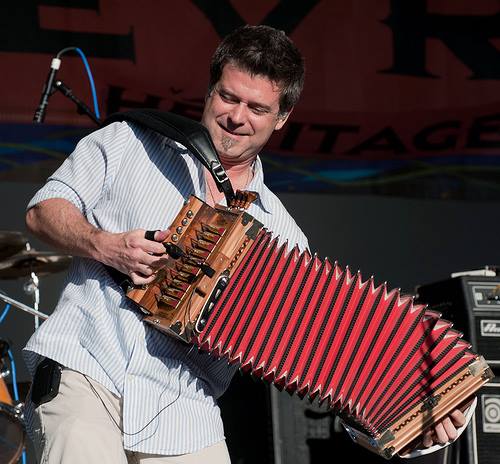 Steve Riley, of Mamou Louisiana, is a widely acknowledged master of the Cajun accordion and its singularly powerful sound. His playing is a standard by which timing, phrasing and ingenuity are measured on the royal instrument of South Louisiana. That, combined with his searing, emotional vocals, songwriting, soulful fiddling and onstage front man charisma have cemented his legacy in the evolution of Cajun music. Steve’s band, the Mamou Playboys, was started in 1988 by Steve and David Greely. They have been very prolific with more than 10 CD’s almost exclusively in Cajun French. Their style has grown from traditional music of Riley’s mentors Dewey Balfa, Belton Richard, and Walter Mouton to a more personal style that still has a distinctively Cajun sound.

Steve and Doug recently made a recording on Valcour Records, in a duo setting, paying tribute to the old masters who first introduced their music to the world in the 1920s. Christopher Stafford is a multi-talented force of nature in Cajun music. He was a founding member of the acclaimed young traditional/progressive group Feufollet, a band both deeply rooted in the francophone soil of Louisiana and pushing boldly into unexplored yet utterly natural varieties of Cajun experience.

He was performing on international stages when he was still attending a French immersion primary school. A multi-instrumentalist, singer, songwriter, and producer, Christopher generates a major portion of the musical creativity of the French cultural community in Lafayette LA.