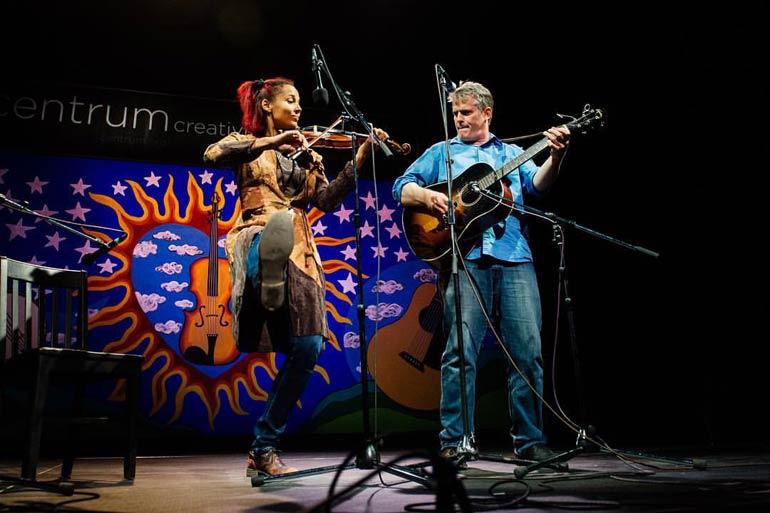 Centrum’s 2017 Fiddle Tunes Festival wraps up this weekend with a rousing Fiddle Tunes Finale, with artists and traditions from around the world. Singer, multi-instrumentalist, dancer, and scholar Michael Alpert has been a key figure in the renaissance of East European Jewish music and culture worldwide since the 1970s. Alpert was born into a Yiddish-speaking family in Los Angeles, California, in 1954. He grew up immersed in immigrant music and culture, including the “Yiddish boardwalk scenes” of Venice Beach, West Hollywood, and similar locales on the East Coast. Moving to New York City in 1979, he was co-founder of the pioneering klezmer band Kapelye, and began intensive documentation of traditional East European-born Yiddish performers, including master singer Bronya Sakina, klezmer violinist Leon Schwartz, singer/drummer Ben Bayzler, and clarinetist German Goldenshteyn, all of whom influenced him profoundly.

Alpert is best known for his performances and recordings as a solo artist, with the ensembles Brave Old World and Kapelye, and collaborations with artists across a broad spectrum of cultures and generations, including Theodore Bikel, Daniel Kahn, and Ukrainian-American singer/bandurist Julian Kytasty. He has performed and taught Yiddish music and culture throughout North America and the world, in venues ranging from Polish village streets to a farmworkers’ school in Florida to Carnegie Hall. As musical director of the PBS Great Performances special Itzhak Perlman: In the Fiddler’s House, he helped bring global attention to Yiddish and klezmer music. Jake is among the most highly regarded klezmer musicians performing today. He tours and records internationally as a soloist, and with Daniel Kahn and the Painted Bird, Di Naye Kapelye, The Brothers Nazaroff, Pete Rushefsky, Frank London, Sanda Weigl, Joey Weisenberg, and many, many more. Jake first began playing violin at the age of 3. He began studies in klezmer from age 12, initially a protégé of Alicia Svigals. Jake later immersed himself in related violin traditions, living in Greece, Hungary, and Romania for extended periods, becoming fluent in both the musical and spoken languages. Pete Rushefsky is a leading performer, composer and researcher of the Jewish tsimbl (cimbalom or hammered dulcimer). Rushefsky tours and records internationally with violinist Itzhak Perlman as part of the Klezmer Conservatory Band, and collaborates with a number of leading figures in the contemporary klezmer scene.

Since 2006 Pete has served as Executive Director of the Center for Traditional Music and Dance, the nation’s leading organization dedicated to the preservation and presentation of diverse immigrant music traditions from around the world, and is on the Organizing Committee of Yiddish New York. He curated the Yiddish program at the 2013 Smithsonian Folklife Festival, and has performed on PBS, NPR, and France’s Radio One. Doug Kershaw was born in Cameron Parish, Louisiana, in 1936, surrounded by Cajun fiddle and accordion music. He was raised in a home where Cajun French was spoken and didn’t learn English until he was eight. He started fiddling at age five, and eventually taught himself to play 28 instruments.

He played in a duo with his brother Rusty, quickly building a solid reputation for their high-energy performances of Cajun two-steps and country ballads. In the mid 50s they had several national hit records, and shortly afterward were invited to become cast members of the Louisiana Hayride, a popular radio show broadcast from Shreveport, LA. The following year they became members of the Grand Ole Opry. At the peak of their early career, in 1958, Doug and Rusty decided to simultaneously enlist in the United States Army. After fulfilling their military obligation, the two brothers recorded Louisiana Man, an autobiographical song that Doug had written while in the Army. The song not only sold millions of copies but over the years has come to be considered a standard of modern Cajun music. The song was eventually covered by more than 800 artists, and became the first song broadcast back to earth from the moon by the Apollo 12 astronauts.

John Carty is one of Ireland’s finest traditional musicians having been awarded the Irish Television station, Teilifis Gaeilge’s Traditional Musician of the Year. He joins previous acclaimed winners Matt Molloy (Chieftains flautist), Tommy Peoples (Master Fiddler), Mary Bergin (whistle player, Dordan), Máire Ní Chathasaigh (Harpist) and Paddy Keenan (Uilleann Piper), all of whom are considered to be the leading exponents of their instruments within the Irish tradition. Carty already has three solo fiddle albums, two banjo albums, two group albums and a sprinkling of recorded tenor guitar and flute music recordings under his belt so it’s little wonder he should have joined such elusive ranks. Born in London, fiddler John Carty has established himself among the elite in Irish traditional music and as a staunch supporter of its preservation. Carty developed his love for fiddle, banjo, and flute, all of which he has mastered, through his multi-instrumentalist father who was a member of the Glenside Ceili Band in London in the 1960’s.

Joining John will daughter, Maggie, herself accomplished banjo player and traditional singer, and son James, a crackerjack fiddler. This family is part of a living and evolving tradition that spans at least four Carty generations.

Singer and multi-instrumentalist Rhiannon Giddens is best known as the frontwoman of African-American string band the Carolina Chocolate Drops, whose 2010 album Genuine Negro Jig earned them a Grammy Award for Best Traditional Folk Album. She began gaining recognition as a solo artist when she stole the show at the T Bone Burnett– produced Another Day, Another Time concert at New York City’s Town Hall in 2013. The elegant bearing, prodigious voice, and fierce spirit that brought the audience to its feet that night is also abundantly evident on Giddens’ critically acclaimed solo debut, the Grammy nominated album, Tomorrow Is My Turn, which masterfully blends American musical genres like gospel, jazz, blues, and Dirk Powell has expanded on the deeply rooted sounds of his Appalachian heritage to become one of the preeminent traditional American musicians of his generation. In addition to his widely influential solo recordings, he has recorded and performed with artists such as Emmylou Harris, Levon Helm, Jack White, Joan Baez, Steve Earle, Kris Kristofferson, Linda Ronstadt and Jackson Browne. His ability to unite the essence of traditional culture with modern sensibilities has led to work with many of today’s greatest film directors as well, including Ang Lee, Anthony Minghella, and Spike Lee. He was a founding member of the important Cajun group Balfa Toujours and has been a regularly featured artist in the award-winning BBC series The Transatlantic Sessions. In addition to performing under his own name in a wide variety of settings, Dirk also tours regularly with Joan Baez, playing 7 instruments during each performance. 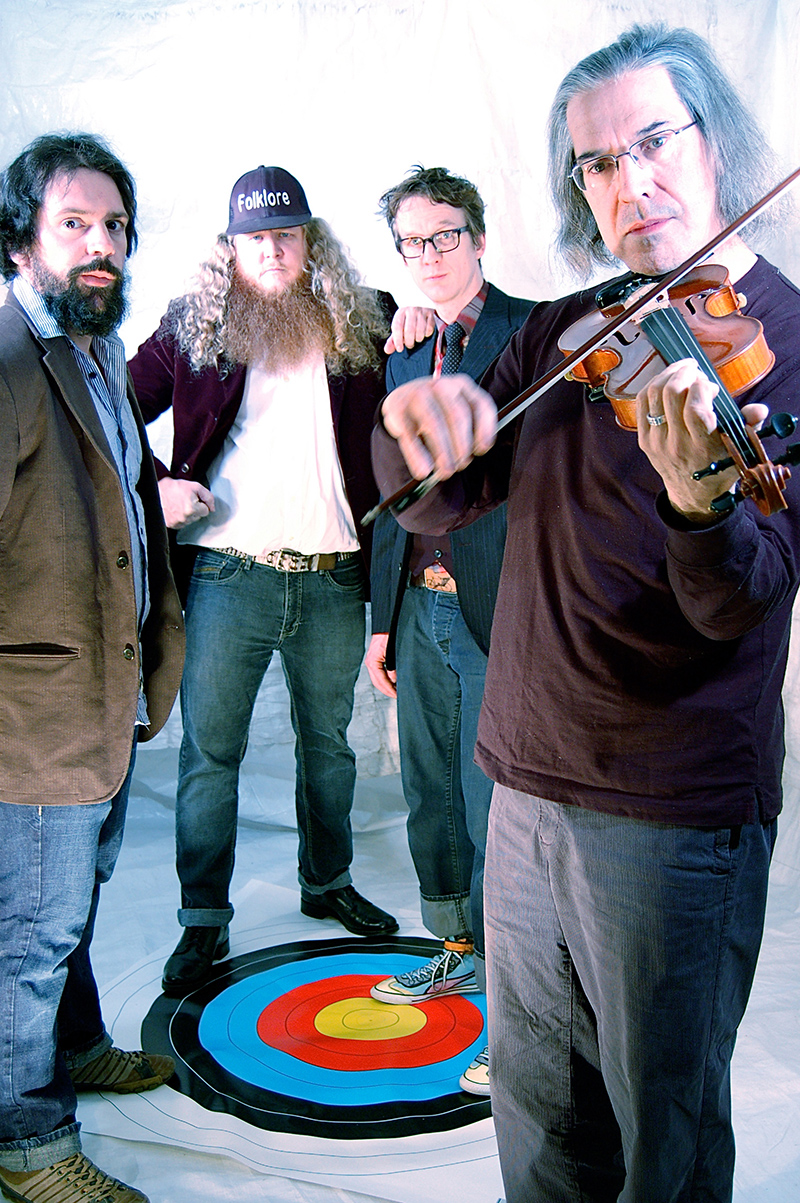 RéVeillons!  is a well-known quartet playing music made in Quebec, traditional with a crude energy – omnipresent percussions which make the heartbeat, an impetuous violin, a rhythmic nuanced guitar, and voices that sing about the  hazardous path of everyday life, with the audacity and the authenticity which the traditional music background acknowledge them for.

A veteran of traditional music of Quebec, Richard has graced Quebec stages and animated traditional dancers for more than 30 years. He was first inspired by fiddlers in his own family from Lanaudiere, and is recognized not only for the energizing swing of his bowing style but also credited for discovering and reviving tunes that were all but lost. Also an accomplished composer, he has created timeless pieces of music that remain popular in countless jam sessions. Richard first taught at Fiddle Tunes in 1991.

High in demand as a percussionist, caller, and step dancer, Jean-Francois has a rich and varied background and is recognized as one of the most original and entertaining dance callers in Quebec. He has dedicated more than twenty years learning, researching and living the folk music and dance of Quebec.  His passion, instinct, energy and charm make him an authentic artist of traditional music of Quebec.

With his unmatched singing style, David gives Reveillons! a raw distinct personality unique among the traditional music groups of Quebec. Having been steeped in traditional music as a child, he brings a vast repertoire of his family’s songs mixed with the unique accompaniment of the English Concertina which he learned despite his passion for French history and language. He claims it is an instrument commissioned by the grey nuns in the 19th century so it is simply a matter of reclaiming it as the rightful property of Quebec traditional music.

A native of Ste-Catherine-de-la-Jacques-Cartier, PQ, Louis-Simon is one of the most remarkable multi-instrumentalists and traditional fiddlers from Québec. His energy and enthusiasm for the music of Québec, Ireland and Scotland has been evident since the age of 3 years when he first starting playing harmonica and amusing himself by sawing away at a small fiddle given to him by accordionist Keith Corrigan. He started to learn guitar accompaniment from the great Québecois guitarist, Paul Marchand, a friend of his father, at the age of 11. He has recorded 3 CDs with his father Daniel, a renowned Québecois fiddler. From 2003 to 2007, Louis-Simon performed, toured Europe and the US, and recorded 2 CD’s with Les Chauffeurs à Pieds. He continues to perform with this group as well as several other artists and groups, and has taught at the Ashokan Fiddle and Dance Camp in Woodstock, NY.