“Shokoufeh. It means ‘blossom’ in Farsi. My last name is Shadabi, which means ‘happy’ and ‘fresh.’ So, if someone knows Farsi, and they know me enough, they usually say, ‘You are a happy blossom, like your name.’” Shokoufeh Shadabi (l) with jazz faculty member Niki Harris (r)

Shokoufeh Shadabi, 28 lives on Capitol Hill in Seattle and loves to sing jazz. Call for a Lyft downtown, and you might find Shadabi behind the wheel, rehearsing an Ella Fitzgerald tune or one by Ida Khalili, an artist who, like Shadabi, was born in Iran.

“As a woman in Iran,” Shadabi said, “With all those difficulties, I couldn’t imagine getting a car or living in a great neighborhood like Capitol Hill. But I could do them all, because dreaming is permitted here and getting them is easier than in my homeland.” Shadabi is making her dreams come true, but many people would not call her path easy, even after she moved to the United States. Shadabi emigrated alone seven years ago, leaving her mother, brother and sister in Iran as she pursued a life where she could feel more independent and free.

“I could not stop crying,” Shadabi said of leaving her family, “When being strong is your only option, you will handle the pain.”

Shadabi says her driving gig is a way to listen to jazz, meet new artists, students and tech professionals while earning a buck or two. Her primary employer is the City of Seattle in the Department of Parks and Recreation where she works as a project evaluator. A former figure skater, she is now a cross-fit athlete as well as a watercolor painter and student at the Seattle Jazz Night School, which is where she learned of Jazz Port Townsend at Centrum.

She wanted to attend, but the costs of a week’s lost wages, plus the tuition, room, and board presented a daunting obstacle. Shadabi applied for a Centrum scholarship, and thanks to several special donors, she attended the workshop at no cost.

“Being a student of legends like Dee Daniels and Niki Haris gave me this opportunity to get that confidence about singing,” Shadabi said of her week at Centrum. “These experiences make me a better singer since I can make a better connection with the audience when I am performing in weddings, ceremonies or hospitals. It’s about more than making money out of singing.” 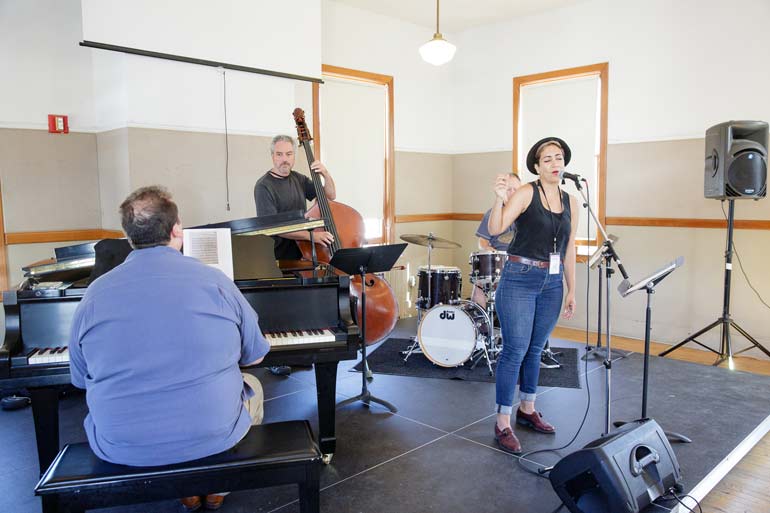 Shadabi said the best moment of the week happened during her performances at Jazz in the Clubs in downtown Port Townsend on Friday and Saturday nights. She sang “All or Nothing at All” by Arthur Altman (made famous by Frank Sinatra) and “La Vie en Rose” in her native Farsi. Shadabi stepped up to the microphone, a “happy blossom” in a shimmering white dress, and said women in Iran are not allowed to perform in public as she was doing in that moment.

“I shared my story about women in Iran singing and I could see them feeling that connection,” she said of the audience.

While Shadabi plans to keep developing her musical education, she is also beginning a career in computer science. She just received another full scholarship, this time to a “hackathon” at the University of Waterloo in Ontario, Canada. Following that, she will be earning a degree in computer science at Seattle University.

“The future is not predictable, but this doesn’t make me less hopeful about getting my goals,” Shadabi said. “Something that I really like is singing for weddings or funerals. Touching people’s hearts is way more important for me than being a famous person. As for computer science, it’s a pretty new path for me. For now, I am thinking about getting into the health informatics area of studying since my background is in public health. But also, I would love to teach! Who knows? Maybe one day I will find a way to teach singing with my own, created application. Like teaching music and coding at the same time. That would be great!” Watercolor of the view from Shokoufeh’s room at Fort Worden that she painted as a thank you gift for her sponsors.