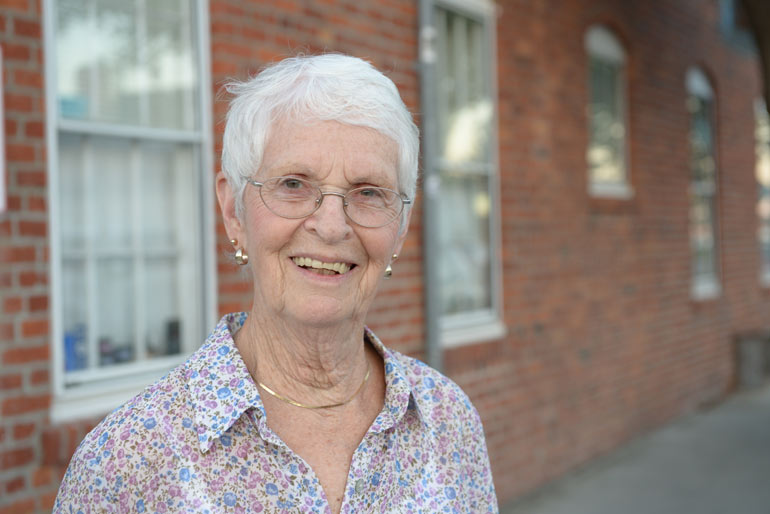 With heavy hearts, but with gratitude for what was truly an uplifting friendship and association for many years, the Centrum community says goodbye to Vernie Colt, who passed away last week at the age of 79.

Vernie worked as an administrative assistant at Centrum for six years. She answered phones and logged data right up until the days before Thanksgiving, when her health took an unexpected turn.

Of Vernie’s passing, Centrum’s Executive Director Rob Birman said, “Vernie was a fixture of the Port Townsend community – beloved by all. Centrum’s volunteers, ticket buyers, participants, board, staff and faculty cherished the warm greeting that Vernie offered, so generously, when one walked through our doorway. I think what I will always admire most about Vernie is her passion for Port Townsend and for the Northwest lifestyle. She was a stranger to no one and a shining light in all of our lives.”

Hali Miller, Centrum’s registrar and often Vernie’s Scrabble-playing partner said, “Her approachability and great many local stories made her a real favorite at Centrum’s front desk, ticket booth, and on the dance floor. She could answer almost any question thrown at her, and would do so with pride. She was a dear friend in and outside the office, and will be sorely missed.”

Mary Hilts, who manages Centrum’s blues programs, said Vernie often attended Centrum’s Port Townsend Acoustic Blues and Ukulele Festival. “Vernie would schedule her work hours around whichever classes were going on at Centrum that she was interested in. No one else in the Centrum office got out and into programs as much as Vernie. She was the poster child of Centrum. She not only got the mission, she lived it,” Mary said.

Vernie’s passion for the arts didn’t stop there, however. Mary also recalled, “At the many music jams I’ve attended in town, Vernie would often be there, too, with her ukulele. She would plant herself in the center of the action and jump in even if she didn’t know the song, and stay until the music stopped. When any singing would start up anywhere anytime, you could count on Vernie to jump right in with a harmony. She was also a great dancer. She had me over to her studio once to show me her clogging. She put on some Rolling Stones and proceeded to blow my mind with her moves and rhythm. “

Mary continued, “If a great band was playing, you could count on an enthusiastic ‘yes’ from her if you were looking for someone to go with you to the show. If it was late at night, no problem, out of town, no problem. She was a rocker.”

The Centrum staff is thankful to have been one part of one chapter in Vernie’s rich and full life. She is an inspiration and will be missed here for years to come.