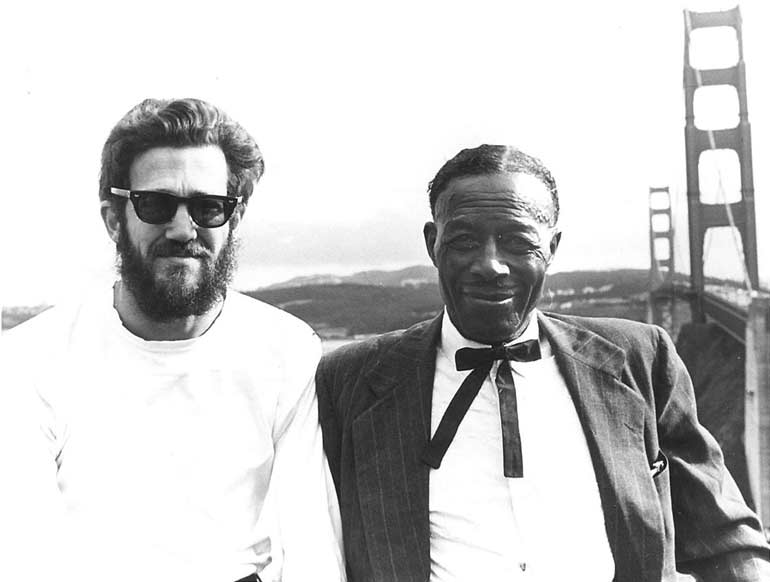 Richard “Dick” Waterman was born in 1935 in Plymouth, Massachusetts.  He began his career as a sports writer, but everything changed in 1964 when he embarked on a journey with Phil Spiro and Nick Perls to locate early blues singer Son House.  Soon after their rediscovery of House on June 21, 1964, Waterman became House’s manager in an effort to reignite the elderly blues man’s career. As House’s success grew, other musicians approached him for assistance and he quickly realized there was a need for his services.  In 1965, he founded Avalon Productions, the first agency devoted to managing black blues artists.  He worked with a number of early blues musicians such as Skip James, Arthur “Big Boy” Crudup, Mississippi John Hurt, Robert Pete Williams, Mance Lipscomb and Mississippi Fred McDowell. Within a couple of years, he was working with younger artist such as Junior Wells and Buddy Guy, both of whom he managed for many years. In the late 1960s, he met Radcliffe University freshman Bonnie Raitt. He managed the aspiring young musician for almost two decades as she rose to international fame.

Throughout his career, he has been a tireless advocate for fair treatment, compensation, and royalties for blues artists. As some of the older musicians passed away, he even assisted in securing royalty payments owed to their family members.  His journalistic tendencies followed him throughout his life.  His camera accompanied him to a host of performances over several decades.  In 2003, “Between Midnight and Day” was published, containing selection of his numerous photographs accompanied by his personal recollections of the artists.  Two years later, he published “B.B. King Treasures”.   His photographs have been shown in galleries both in the U.S. and abroad.

He has garnered a number of awards during his career.  In 2000, he was inducted into the Blues Hall of Fame, one of the first non-performers to receive this honor.  In 2014, he received his third Keeping the Blues Alive Award from the Blues Foundation.  He is the only person to be honored with more than one of these prestigious awards.   In October 2017, a ceremony was held on Beale Street during which he was honored with a Brass Note on the Beale Street Brass Note Walk of Fame.