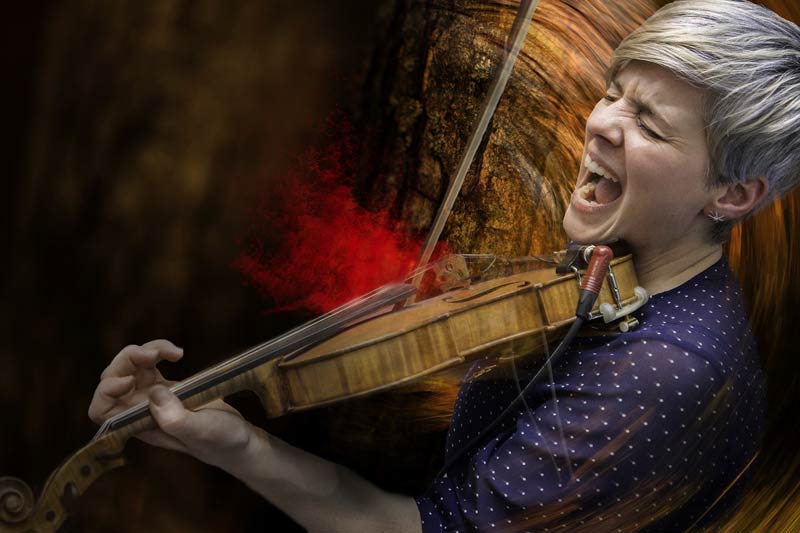 We’re excited to announce that Quebecois musicians Stéphanie Lépine (pictured above) and David Simard are coming to Fiddle Tunes in 2018! A skilled violinist for over 20 years, Stéphanie was born into a family of musicians. She is a founding member of the traditional music group La Galvaude, and subsequently helped to form the group Norouet. The second album of this quartet, entitled N2, was among the five best recordings in the world in 2009, according to the newspaper “Le Devoir.” Her fiddling, both energetic and sensitive, can be heard on numerous albums (De Temps Antan, Genticorum, etc.), and she’s been a finalist at the prestigious Canadian Grand Masters Fiddling Competition.

In 2015 Stéphanie recorded her first solo album La Grande Ligne, featuring traditional tunes from her family repertoire and from the great fiddlers who have popularized Quebecois fiddle music in the twentieth century, including Isidore Soucy, Jos Bouchard, J. O. LaMadeleine, and Édouard Richard. This recording truly showcases her brilliant bow game. Eager to share her cultural heritage, she helped to found the Traditional Violin Camp Quebecker from Lanaudière, in 2008.

David Simard is a versatile, creative and energetic musician. He plays fiddle, guitar and a whole range of other instruments; he’ll teach both fiddle and guitar at Fiddle Tunes. Born in Saint-Félicien, Lac-Saint-Jean, surrounded by family and his ballroom dance teacher parents, he started playing music at age 12. After many traveling adventures all over Quebec, Ireland and France, David decided to dedicate himself to his musical roots. His repertoire comes from collections of music albums of all sorts and musical archives, but mostly from meeting and playing with other musicians. His characteristic fiddle sound was strongly influenced by Isidore Soucy and Louis “Pitou ” Boudreault, and many others. Although David is mostly a self-taught musician, he is a graduate of the Lanaudière Regional Cégep in Joliette in traditional and jazz guitar. He also recently started composing and arranging electronic music. Newly living in Montreal, he often leads different traditional music sessions around in town.