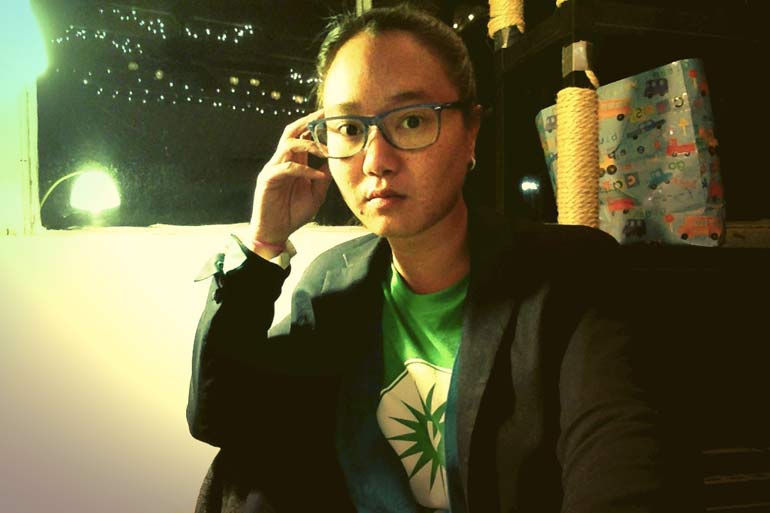 We’re very excited to have the writer Lily Hoang on our Fiction faculty for the 2018 Port Townsend Writers’ Conference. Hoang is the author of five books of prose, including Changing (recipient of a PEN Open Books Award) and A Bestiary (winner of the Cleveland State University Poetry Center’s Non-Fiction Book Prize). With Joshua Marie Wilkinson, she edited the anthology The Force of What’s Possible: Writers on Accessibility and the Avant-Garde. In Summer 2017, she was Mellon Scholar in Residence at Rhodes University in South Africa. She is Editor of Jaded Ibis Press and Executive Editor of HTML Giant, and is on the faculty of Literature and Writing at the University of California San Diego.

In her award-winning A Bestiary, Lily Hoang explores the boundaries between fact and fable. Thirteen linked essays explore the connections and gaps between familial identity, racial identity, feminism, addiction, friendship, memory, love, and reconciliation using an array of different literary structures.  The poet and critic Wayne Koestenbaum noted of A Bestieary:

“[It] is a work of great subtlety, precision, intelligence, daring, and emotive keenness. It seems completely contemporary (by which I mean that it is unlike anything I’ve read and that it makes me want to change my own writerly procedures). With head-long, reckless, improvisatory gestures, Lily Hoang prompts us to rethink what literature today can dare to aspire to. Her intellectually magnanimous book’s position on the threshold between recognizable ‘literature’ and some other vanguard form of performance/utterance made me feel happy and stimulated and dizzy (in a rapturous way) while I was reading it.”

In 2014, Zachary Doss of The Black Warrior Review interviewed Hoang and discussed how she approaches her writing:

BWR: I’ve noticed that your books, while similar in some ways, are really very different in terms of form and content; you’re an extremely versatile writer. Do you start each project intending to take on a new style, or do you find that it just happens?

LH: Most of my books are OuLiPian games. I tend to let the form dictate the content, which is why my books are so varied, so unfamiliar—especially to me. I start with the formal game, and then I enter with the sentence, one first and then the next. I guess the commonality among my books is that they’re all syntactically questionable.

BWR: How do you think social media, or the internet in general, has affected your life as a writer (if at all)? Do you think the internet has had much impact on us as writers generally, other than the fact that I can now Tweet at Stephen King?

LH: Years ago, I was in Houston for a reading and I hung out with fellow HTML Gianters Gene Morgan and Ryan Call and Gene said that we’re all the Internet generation of writers and there’s some real wisdom to that. Or: maybe wisdom isn’t the right word. It’s just—look at the trend in very short fiction and it seems impossible that social media has had no influence on form, consciously or not.

BWR: You recently tweeted this: “Most ppl would say I misuse the comma. I say you just haven’t maximized the comma, its magic superheroic power.” I was excited to see someone else who was enthused about the comma. What mileage do you get out of the comma in your writing? What are your thoughts on the magical power of the comma?

LH: I have the word parataxis tattooed to my chest, it’s my favorite poetic device. Some people would call this a comma splice, others might call it a run-on sentence, but to me, it’s parataxis. I am working on a non-fiction book with Bhanu Kapil on punctuation, desire, and the post-colonial body. The magical power of the comma is its ability simultaneously to connect, to separate, to fuse and infuse.

BWR: I’ve seen your work referred to as “experimental,” and when I hear that I’m always unsure of what it means. Do you consider yourself experimental, and if so, what does that mean to you?

LH: When I was younger, I was determined to be “experimental.” I didn’t quite know what “experimental” meant, but I was sure my work followed in that tradition—the irony! Today, I’m not so sure what experimental means. For instance, Ben Marcus’s work. He’s been criticized for his turn to the traditional, but I think his newer work is even more “experimental,” it challenges in its recognizability.

I guess now more than ever, I have no idea what “experimental” means. I’m constantly questioning its definition and its intention. That being said, I have a cat named Gertrude (after Stein, obv), and I just edited an anthology with Joshua Marie Wilkinson called The Force of What’s Possible: Writers on the Avant-Garde and Accessibility, where close to 100 writers explore the very meaning of “avant-garde” and “experimental” and “accessibility,” among other things. I’m often typecast as “experimental,” and I’ve worked to cultivate it, or, a younger me at least. And most of my writing friends—ahem: virtual friends—are also typecast as experimental, whether they accept the role or not. So, sure, I’m experimental, whatever that word means anymore.