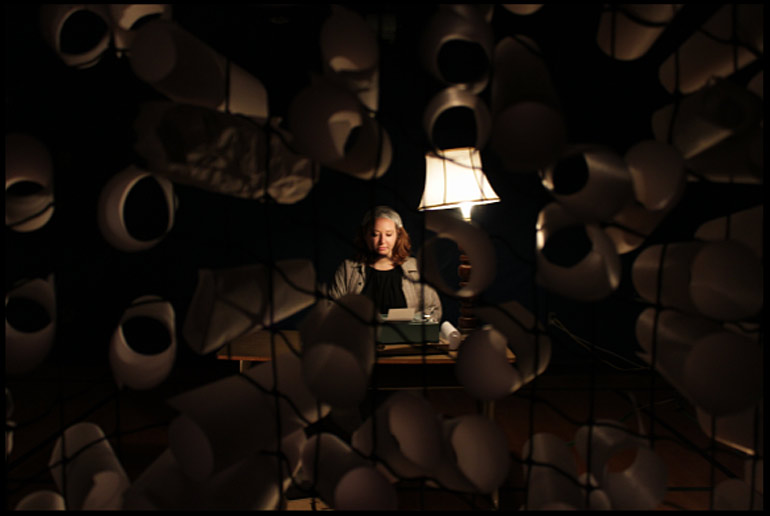 Del Castillo is pursuing a Master of Fine Arts degree at the University of Texas Rio Grande Valley, where she is working toward refining her concepts of cultural identity, the understanding of mental health, and the appreciation of the female figure. Her current work explores painting as a medium on experimental surfaces, such as using oil, acrylic, and watercolor on various wood panels or recycled and found materials. Del Castillo was born and raised in the bordering cities of Brownsville, TX and Matamoros, Mexico. Bonnie Barnard and Colette Tennant are working on a series of mystery novels set at the various McMenamins Hotels in Northwest Oregon. They are are at the very beginning stage of this project and their time at Centrum will be spent creating outlines for the various novels in the series. They are building ideas for characters and the settings for these works. They are excited about the idea, and we think Northwest audiences will be interested in this mystery series.

Colette Tennant has two books of poetry. Her first book, “Commotion of Wings,” was a finalist in the Main Street Rag’s national poetry contest and was chosen to be published as an editor’s choice. Her second book, “Eden and After,” was published in 2015 by Tebot Bach Press. Her poetry has been published in various journals, including Southern Poetry Review, Global City Review, Dos Passos Review, and most recently, Prairie Schooner. In 2014, Colette’s poetry was nominated for a Pushcart Prize. She has a Ph.D. in English from Ohio State University and is a Professor of English at Corban University in Salem, Oregon where she teaches creative writing and literature classes.

Rev. Bonnie Barnard, PhD, received her B.A. at University of Puget Sound, Tacoma, majoring in Religious Studies while minoring in Spanish and Business. Her M.A. and PhD are from Emerson Theological Seminary. Barnard has published several books: “Forgive Your Way to Freedom,” “Qualities of God Qualities of Being,” “A Year of Go(o)d,” “A Metaphysical Lent” (e-book), and, “Affirmative Prayer: Becoming Your Own Answered Prayer.” Reverend Bonnie writes for her own blog addressing spiritual living www.bonniebarnard.com.

ARTBARN is a theater collective. They are currently developing a site-responsive, immersive piece about women – how we come together in crisis and perhaps how, before that crisis, we have the luxury or arrogance to be apart.

“The piece is set in the near future – a time entrenched in complacency and beyond outrage – in which a war has left us in a rogue state where lawlessness reigns and the systems of morality are absent,” says Jess K Smith of ARTBARN.

2018 marks a significant moment of growth for this company as they take on a multi-year development process for the first time, having completed a residency at the University of Puget Sound in June, 2017. At Centrum, they plan to develop the script further, with plans to debut the piece in 2019. Gillian Jorgensen is a playwright and teaching artist based in Seattle.

She has spent “most of her adult life living in apartments over-crowded by too many Sharpies and various piles of art supplies” – for which she grateful, because those items allow her to be at-the-ready for all things Teaching Artist. They certainly came in handy during her tenure as Artistic Director at Annex Theatre.

When not teaching or directing, Gillian says she’s “knocking out or fretting over various bits of writing.” Her plays are regularly seen on stage and in the woods of Mercer Island for Youth Theatre Northwest, and at area schools for Book-it-All-Over! Favorites include adaptations of Outside Over There, Mouse Soup, Pinocchio, and My Father’s Dragon. Her original works And Also Fierce, The Visible Wood, and the annual Haunted Forest series have appeared with Youth Theatre Northwest. Someday she’ll be proud to say she’s finished the play inspired by her two grandmothers, The Nut-Brown Girl. Gillian holds a BS in Speech in Theatre from Northwestern University.

Author of over one hundred journal articles and twenty books, Delgado’s work has been praised or reviewed in The Nation, The New Republic, the New York Times, Washington Post, and Wall Street Journal.  His books have won eight national book prizes, including six Gustavus Myers awards for outstanding book on human rights in North America, the American Library Association’s Outstanding Academic Book, and a Pulitzer Prize nomination. Professor Delgado’s teaching and writing focus on race, the legal profession, and social change.

Jean Stefancic is Professor and Clement Research Affiliate at the University of Alabama law school. Her writing, which focuses on law reform, social change, and legal scholarship, includes over forty articles and seventeen books, some co-authored with Richard Delgado with whom she co-teaches courses on race and the law.