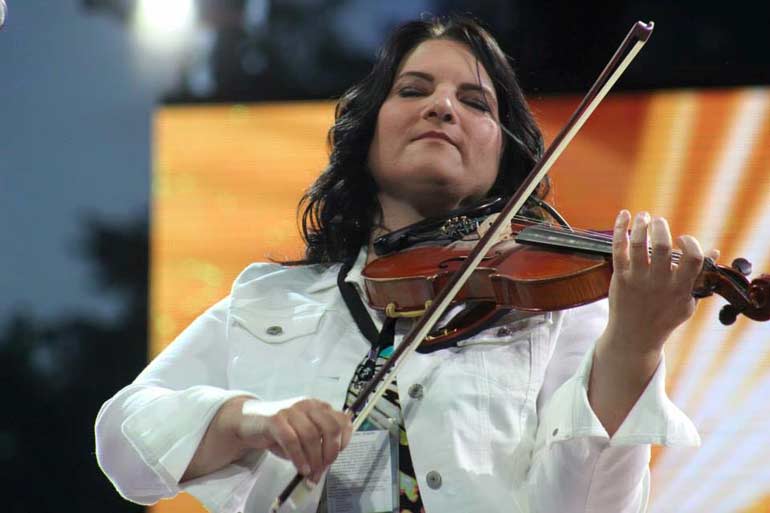 Join Centrum for the closing public performance of the 2018 Fiddle Tunes festival and sample music from across North America. Partners in life and music for nearly 40 years, Don and Cindy Roy are leading exponents of Franco-American traditional music in Maine. Both are descendants of French families that emigrated from Canada—Don’s grandparents from Quebec, Cindy’s from Prince Edward Island. Don’s virtuoso fiddling and Cindy’s steady, rhythmic piano accompaniment, plus her top-notch step-dancing, have livened up many a house party and entertained audiences across the country.

Don grew up in a large French family in Rockland, and he’s been fiddling since he was 15, when his uncle gave him his first instrument. “I just shoved it under my chin and started sawing,” he said. He learned as a teenager at house parties, where fiddles and guitars were passed around and songs exchanged deep into the night. He quickly became better than the older and more experienced people he was playing with, including the uncle who taught him, Lucien Mathieu of Westbrook. Since that time he’s played at Carnegie Hall, Lincoln Center, the Kennedy Center and the Library of Congress, and performed on Garrison Keillor’s “A Prairie Home Companion.” And now he’s learned to make his own fiddles.

Cindy is well known for her step dancing piano accompaniment, which is among the best in New England. Augmented by her rhythmic feet, she adds life and enthusiasm to the music. The Modock Rounders, a traditional stringband from West Virginia’s Kanawha Valley, and they are keeping hot the fires of the Mountain State’s fiddling heritage.

Jesse is an award-winning fiddler from Point Pleasant, WV, who learned to play from visits with local masters Bobby Taylor, Franklin George, John Morris, and Terry Vaughn, while also pouring over classic 78 rpm recordings and albums by The New Lost City Ramblers. As well as being heavily influenced by the playing of Wilson Douglas and Lester McCumbers, Jesse draws equal inspiration from friend Stephen “Sammy” Lind of The Foghorn Stringband.

Cody, who is also an award-winning fiddler from Point Pleasant, WV, has been picking the guitar since before he and Jesse met in middle school and although neither of them grew up with old-time music, Cody now belts out traditional ballads and songs as if he’s known them his entire life. Being influenced by folks like Ginny Hawker & Tracy Schwarz, Roscoe Holcomb, and Ralph Stanley, Cody sings and plays with a conviction that is all too rare in modern music.

Kim was born in Clendenin, WV, and has been playing clawhammer banjo since the 1970s when she was first captivated by the fiddling of Wilson Douglas, who then took her under his wing and taught her everything he knew. She has since had the honor of playing with and knowing some of the most highly influential West Virginia fiddlers of the last 40 years. Kim is a true American treasure and the Rounder’s connection to a past generation of musicians that live on through her storytelling and lively banjo playing. Belen Escobedo plays rare and beautiful fiddle music in the South Texas Tejano (Texas-Mexican) tradition. Growing up on the South side of San Antonio and working as a professional fiddler since she was a teenager, Belen has preserved a unique style of fiddling that has all but disappeared from the Texas borderlands. Belen has a vast and unique repertoire, a repertoire once common across South Texas, but now she is nearly the only player left keeping this music alive. When Belen was growing up, there was no one playing this string music in San Antonio. Her grandfather missed dancing to it so much that he and his friends would whistle the tunes to Belen so that she might learn them.

Belen performs at festivals, concerts, dances, and other events in Texas. She has twice been a featured fiddler at the Festival of Texas Fiddling, and in 2017 was awarded the prestigious Texas Master Fiddler Award. She has performed at the Polkapocalypse Festival, Texas Folklife, and numerous other events and festivals across Texas. She’ll be bringing one of her groups to Fiddle Tunes, Panfilo’s Güera, which features Belen on fiddle accompanied by bajo sexto master Virginio Castillo and Ramon Gutierrez on the tololoche (a borderlands upright bass).

At the age of four, Patti began to learn playing the fiddle, and has a resume that reads like that of an Olympic champion. A few to her credit include 3-time Champion at the famous Pembroke, ON competition, 6 time Manitoba Champion, 3 time Grand North American Champion, and in 1994, 1995 and again in 1996, Patti won the prestigious Canadian Grand Masters Fiddling Championship in Ottawa, ON. Patti was the first woman in the history of Canada to ever win and was the very first person from Western Canada to attain the crown. Her playing is characterized by a pulsating, rhythmical lilt that is guaranteed to get you on the dance floor. 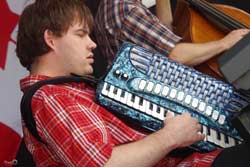 Considered one of the smoothest players in North America, Patti is known for her effortless delivery of some of the best traditional Canadian fiddle music of all time.

Patti will be accompanied during the week by multi-instrumentalist Jeremy Rusu. Blind since birth, Jeremy plays every style of music imaginable. Whether it’s on jazz piano, drums with a big band, country lead guitar, bluegrass mandolin, or accordion, Jeremy Rusu is right at as long as he’s making music. He is in great demand in several bands around Winnipeg and is also busy working as a studio musician. Most recently, Jeremy has released his first solo recording titled “The Accordion Album.”