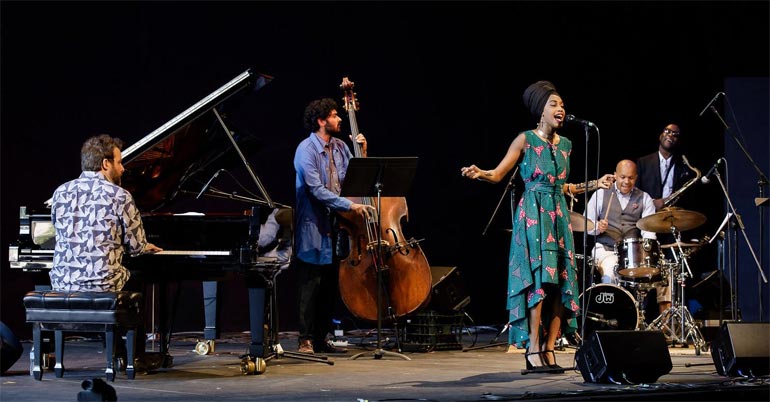 Making her Pacific Northwest debut, Jazzmeia Horn thrilled a near-capacity crowd in McCurdy Pavilion at Centrum’s Jazz Port Townsend in late July, 2018. Backed by an all-star group including saxophonist Tim Warfield, pianist Taylor Eigsti, Harish Rhavan on bass and Marcus Baylor on drums, the multi-award winning young singer presented songs ranging from Cole Porter to a Betty Carter classic and two songs of her own.  Still in her twenties, Jazzmeia Horn has been the recipient of numerous awards and accolades, including international competitions named for Sarah Vaughan, Betty Carter and Thelonious Monk.  Her first album, “Social Call” was issued last year.

This concert is one of a series from Jazz Port Townsend recorded for broadcast on Jazz Northwest.  Next week (9/2), the Centrum All-Star Big Band Tribute to the late David Marriott, Sr. will air.  David grew up in Port Townsend and was a staunch supporter of the arts including the Centrum Foundation, Earshot Jazz and others. His  two sons, David, Jr (trombone) and Thomas (trumpet) are featured in this tribute and offer personal recollections of their father’s favorite music.

Jazz Northwest is recorded and produced by host Jim Wilke and airs each Sunday afternoon at 2 PM Pacific on 88.5 KNKX, simultaneously streaming at knkx.org.   After broadcast programs are archived and may be streamed on demand at jazznw.org.