Pictured above: Photographer Marilyn Montufar on location at Fort Worden.

In the studios at Centrum, Cicelia Ross-Gotta is embroidering Google reviews about a motel onto bed sheets, Jaleesa Johnston is using locks of her own hair to rupture human forms, Francesca Lohmann is experimenting with cotton candy as a sculpting medium, Leon Finley is adding panels to a 40-foot long drawing, Marilyn Montufar is photographing the coastal landscape, and Hongzhe Liang is punching hearts into loyalty cards he’ll never cash in.

The artists are part of the Emerging Artist Residency program at Centrum. Nominators affiliated with Centrum invited 70 promising, early-career artists living in the Northwest to apply this year. Three jurors, Rachel Cook, Eleanor Erskine and Elisheba Johnson selected the six finalists. Centrum awards each emerging artist with a $1,000 stipend as well as housing and studio space for the month of October. The public is invited to visit the studios from noon to 4 p.m. on Saturday, October 27.

“I saw thought-provoking and exciting work from a wide array of Northwest artists,” Johnson, said of this year’s applicant pool. Johnson is Project Manager for the City of Seattle’s Public Art Program. “We worked hard as a panel to mix ideas and media so the cohort of artists could have a truly rich experience. I can’t wait to see the work that comes from their time at Centrum.”

Two weeks into the residency, the artists were beginning to make strides in their work. Ross-Gotta, of Seattle, is exploring the idea of what it means to make a temporary living space home. The concept is inspired by her father, who struggles with addiction and homelessness. He currently resides in a motel that, according to one Google review, is “dirty and scary.” Ross-Gotta mined those Google reviews for details about what her father’s life might be like.  Sprinkled among the constellation of one-star reviews, she would occasionally discover a four-star rating.

One of them was by Kristy who wrote, “Still here. Could use some deep cleaning. But front desk and housekeeping are amazing. GREAT CUSTOMER SERVICE.” Ross-Gotta saw Kristy’s name appear in other reviews, and began to piece things together.

“Kristy is amazing,” Ross-Gotta said. “I’m pretty sure she’s housekeeping staff. So many of the short-term guests see the motel as this seedy disgusting hole. But, for the people who live there full time, it is a community.” Ross-Gotta is embroidering a selection of those reviews onto materials one might find at a motel. Eventually, she will stitch the them into a quilt.

“Home is who,” Ross-Gotta said, “That’s the phrase that keeps running through my mind.”

In Centrum’s largest studio space in Building 205, artist Jaleesa Johnston of Vancouver, Wash., is experimenting with large-scale drawings that have to do with “black female subjectivity and the experience of the body as both object and subject.” 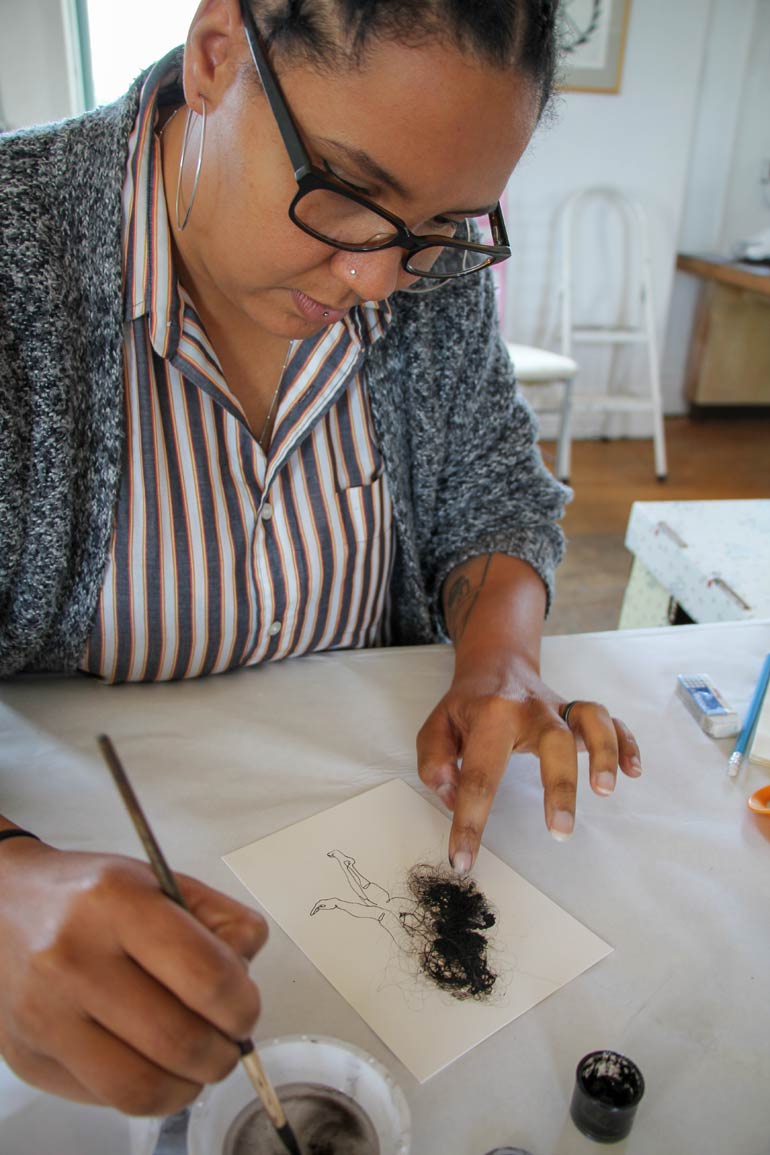 The drawings show female figures mid-movement as parts of their bodies disappear into what looks like inky smoke. To create that effect, Johnston first lays down a small clump of her own, collected hair onto the paper. Then she dabs paint over it with a brush before lifting the hair back up off the drawing. 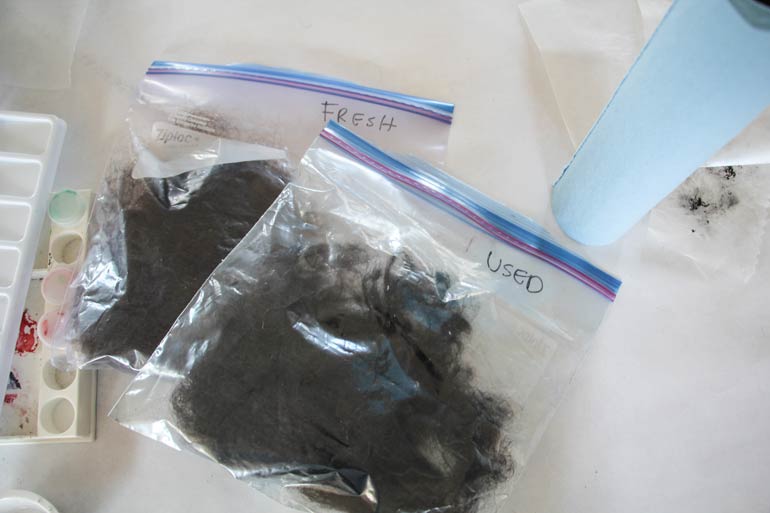 “What I’m drawing all disappears into abstract, gestural paintings,” Jaleesa said. “That disappearing moment, or that moment of colliding into another body, and becoming one, is the point of rupture—where a body is no longer a solid mass but begins to open up to all of the interior-subject things that make up its parts.”

Johnston is also manipulating the paper itself. One 5-foot-tall test piece featured a crumpled ridgeline extending up one side of the drawing.

“There’s this really large crack in the wall in my apartment here,” she said. “And, I thought it was beautiful, so I drew it and incorporated it into this work.”

Across the hall, artist Francesca Lohmann, of Seattle, is experimenting with sculptural materials while surrounded by her photographic prints of water droplets. Hard candy, taffy, cotton candy, small potatoes, eggshells, and seashells also filled her studio. 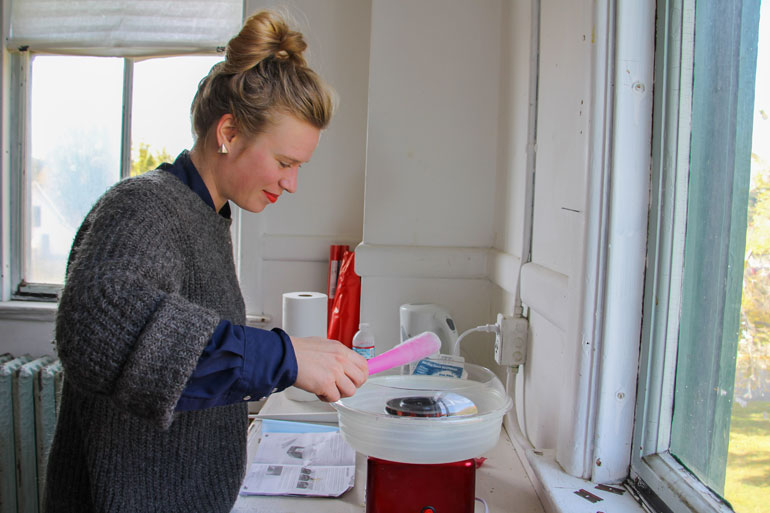 “I’m just making stuff,” Lohmann said. “It’s been a while since I’ve had time to just mess around with things and not be interrupted. I’m not sure where everything is going. I have some starting points and then I go from there.”

Recently, Lohmann made a 120-pound sculpture from taffy. She filled a cube mold with the confection, then, releasing it, allowed it to lose its shape over time. “I’m interested in the process of losing form,” Lohmann said. “And how the thing settles itself, and the mass of material, the fact it’s edible and sticky and the relationship of color to flavor.”

Downstairs, Leon Finley, of Seattle, is using large wax crayons to compose colorful, tree-inspired drawings on panels of paper that stretched across the floor and up the wall. The connected panels speak to the connection between all things, even if they seem separate, he said. 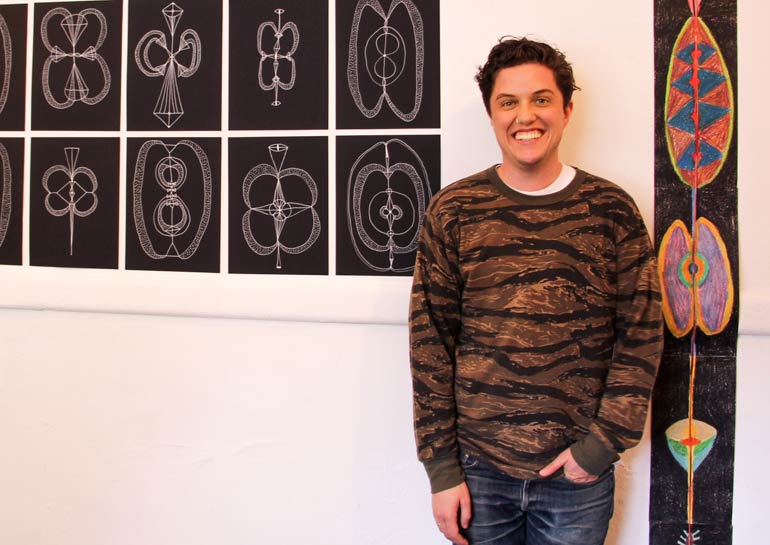 “I feel like I’ve already gotten three months worth of work done,” Finley said. “The work that I’m making is very much about trees and experiences with the natural environment. Seattle is great, but being here and being able to work in the studio and go out into the park and have that relationship with the forest here is cool.” 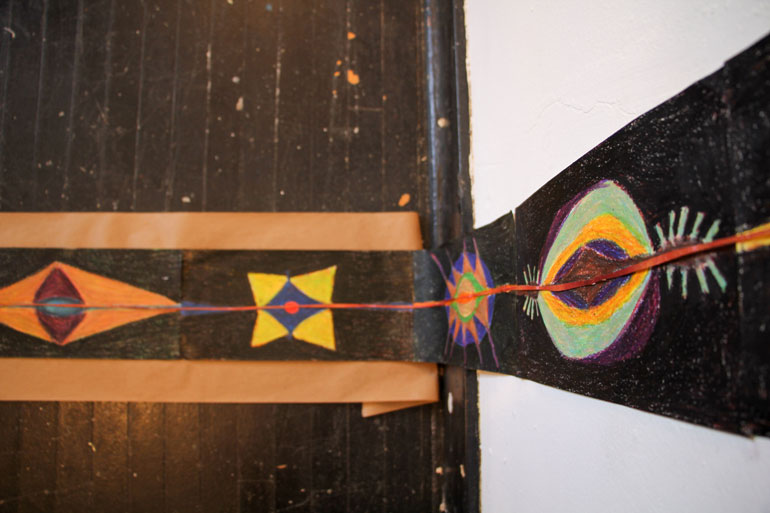 Photographer Marilyn Montufar is also interested in the natural landscape. Her work is taking her to Neah Bay, about a three-hour drive to the west—a long drive, but still not quite as long as it would be from her Seattle home.

“Right now I’m putting a puzzle together,” she said of her project. “When I first came out to the Washington coast, I was taken aback at how beautiful it is. It had me asking how community relates to landscape and how culture is influenced by landscape.”

Back in the Fort Worden Schoolhouse building, across the hall from Ross-Gotta, artist Hongzhe Liang is sculpting with clay, rocks and styrofoam bowls. He is also experimenting with the concept behind punch cards that businesses use to reward customer loyalty. 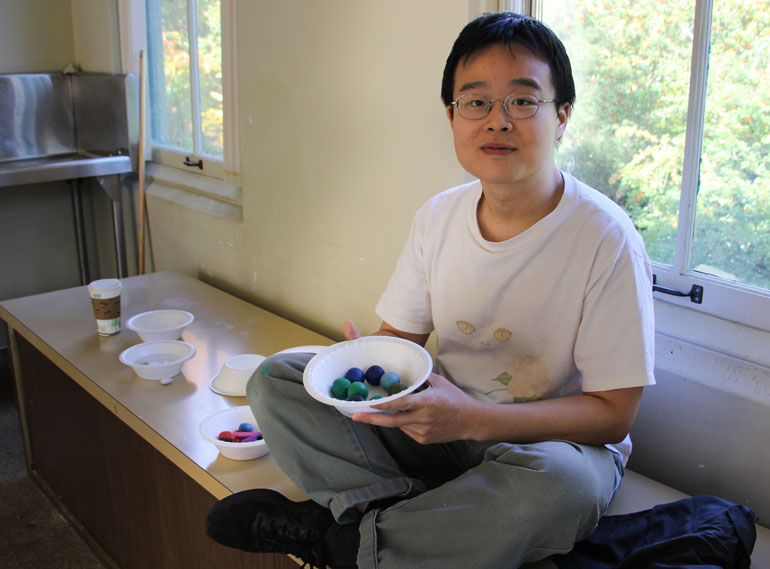 Liang said, “Seeing and using a punch card reminds me of the relationship I have with my family. Every time I buy them stuff, or they buy me stuff, it’s like a punch card. It’s a weird relationship. I haven’t figured it out yet…I’m interested in the idea of ‘Buy ten items, get one for free.’ But, it’s not really for free.” 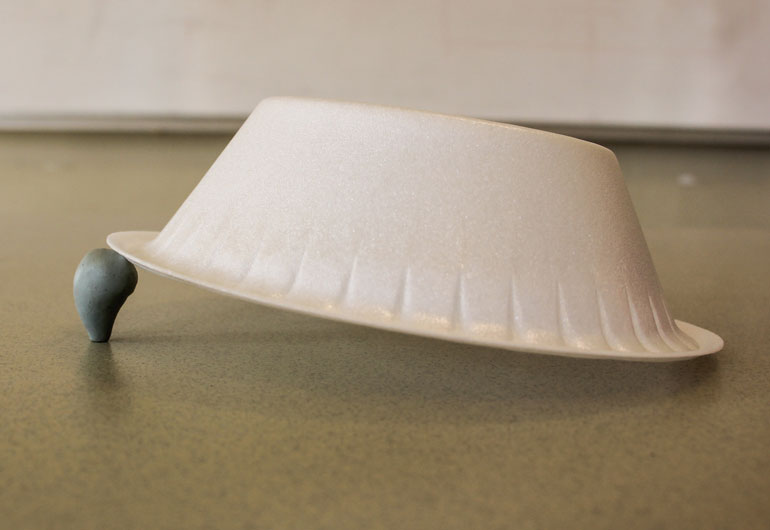