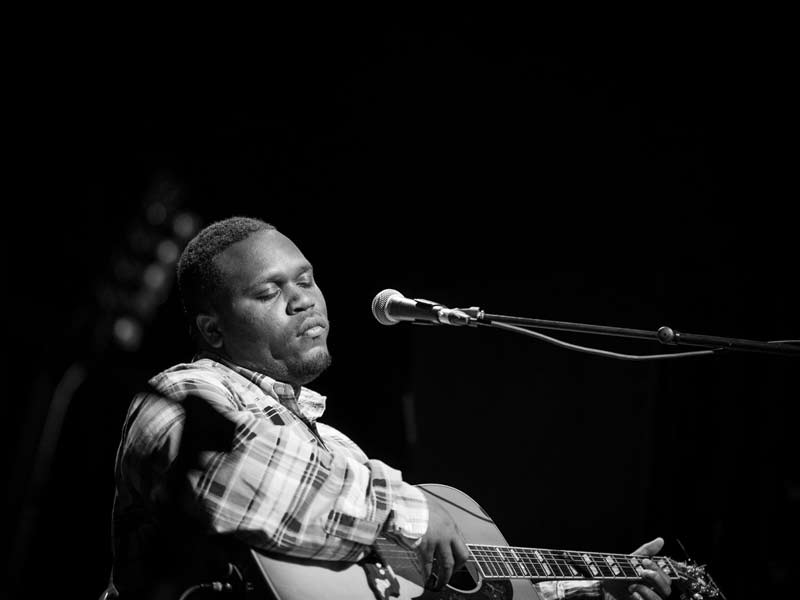 Hailing from Greenville, Georgia, Jontavious Willis brings his knowledge and expertise to the Port Townsend Acoustic Blues workshop this summer (2019). Willis blends technical instruction with country blues history to ground the work in the classroom in the larger rhythm of blues music making.

Jontavious grew up singing gospel music at the Mount Pilgrim Baptist Church with his grandfather. It was there in church, singing gospel music at the age of three, where his passion for music began, but it was not until later in his childhood that he learned to play an instrument. Beginning with the piano then moving to the trombone, Willis found his true love when his dad granted his Christmas wish for an electric guitar. Willis was awestruck, practicing for two months until February when sensing he was “playin’ pretty good, not awesome, but it was good enough” to purchase his first acoustic guitar.

From there, Willis took his musical passion and talents full circle in returning to the church—this time with a guitar. Meanwhile playing music in several churches, he began playing the blues at home, moving to the public scene in 2012. Fast forward three years to 2015 where he played alongside a man with connections to one of Atlanta’s concert and festival venue hotbeds. Soon Willis got the chance to play another festival and then another and another. Continuing to gain momentum, it was during this snowballing of musical opportunity that his talent caught the eye of the renowned blues artist, musician, and Grammy Award winner, Taj Mahal.

“That’s my Wonderboy, the Wunderkind. He’s a great new voice of the twenty-first century in the acoustic blues. I just love the way he plays.” Taj Mahal, after inviting Jontavious to play on stage in 2015.

Currently Jontavious is finishing his studies at Columbus State University, majoring in sociology. Upon completion of his degree in May, Willis anticipates the freedom to embark on his musical journey full time.