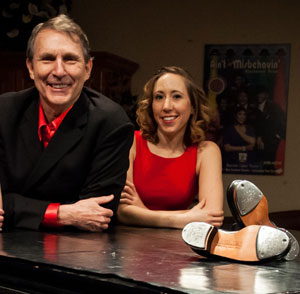 Bill Evans was named one of the world’s three favorite tap dancers in the Dance Magazine Readers’ Poll. He began his professional career as a classical ballet dancer, but switched to modern dance in his late 20s, and became an iconic figure in the world of contemporary dance with his Bill Evans Dance Company. During the years it was based in Seattle, BEDCO was the most-booked dance ensemble in the United States. Centrum produced the first of many Evans Dance Company residencies in 1980.

In 1978, Evans brought Bubba Gaines and Cookie Cook, two of the African American artists who created the art form of rhythm tap, to perform their show Shoot Me While I’m Happy in the Bill Evans Summer Festival of Dance at Seattle Center. Inspired by those great hoofers, Evans rekindled to his childhood tap dance roots and he has accomplished parallel careers as a modern dance choreographer/performer/education and a rhythm tap dancer over the past 30 years.

He will be joined at the JFK Building at Fort Worden on August 10 and 11, by Courtney World, his tap dance colleague for many years in western New York; by the Seattle-based jazz musician and tap dancer Alex Dugdale; and by the Wichita-based jazz pianist James J. Kaufmann. The evening will include a dynamic variety of styles and moods of tap dance performed to an equally diverse set of jazz music standards. On Saturday only, the program will also include two modern dance works performed by participants in Evans’ 43rd annual Summer Institute of Dance. The atmosphere will be celebratory and informal. Evans will share anecdotes from a seven-decade long career as a tap dancer and give some historical context for the variety of works to be performed—including classics by African American artists who pioneered the art form and original Evans choreography.

Courtney World grew up in western New York and met Evans when she became an MFA candidate at the College at Brockport, where Evans was a professor. She soon joined the Evans Company, and she performed for many years in Evans choreography, both modern and tap. She is now the director of dance at the University of the South in Sewanee, Tennessee. James Joseph Kaufmann was an accompanist in the SUNY College at Brockport Department of Dance when Evans became a professor there in 2004. Kaufmann has a master’s degree in jazz music from the prestigious Eastman School of Music in Rochester, New York, and has also trained as a classical pianist.

He and Evans have collaborated on many projects since 2005. J.J. is currently based at Friends University in Wichita, Kansas.

Alex Dugdale first collaborated on an Evans tap dance show in 2011, when he was an undergraduate jazz performance major at the Eastman School of Music. Alex grew up in Seattle studying both instrumental music and rhythm tap dance (with Cheryl Johnson, who later became Evans’ tap dance partner in western New York). Alex returned to Seattle upon graduation from Eastman, and he has created a vibrant career in the Pacific Northwest as a jazz musician/tap dancer.