The closing public show of Centrum’s weeklong Fiddle Tunes festival is always a summer highlight, and this year’s Finale is no exception. We’re particularly thrilled to welcome Fru Skagerrak from Scandinavia, and high-energy, audience favorites Genticorum from Quebec. 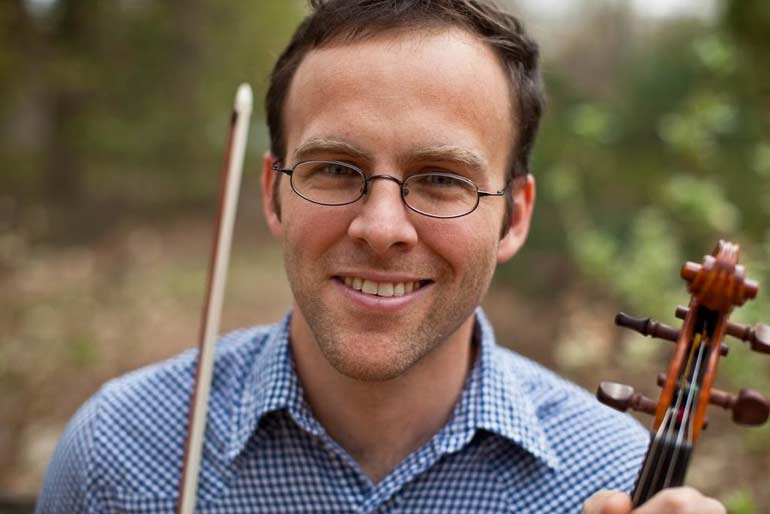 Raised in southeast Tennessee, Joseph Decosimo is a traditional musician and folklorist with a deep respect and love for the older music of his home state and the broader South. His old time fiddling and banjo playing has introduced listeners to the richness and vibrancy of the region’s musical traditions. Based out of Durham, NC, he currently performs and teaches old time music anywhere that people are willing to listen.

When not playing music, he is writing a dissertation of aesthetics, musical learning, and sound technologies in old time music. In seventh grade, he purchased a banjo from a neighbor and quickly found his way to the backrooms of the local Friday night opry where he encountered older musicians from the region. At sixteen, he began making regular visits to learn from old time fiddler Charlie Acuff. He has dedicated himself to spending time with the master fiddlers living in the region, including Clyde Davenport and Charlie McCarroll. By grounding himself in a regional repertoire and style, Joseph crafts music for the present with a deep understanding of place and a reverence for the past. Playing with Joseph will be Bethel native Travis Stuart, who began playing the banjo as a boy in Haywood County, North Carolina. Travis is a respected banjo player and multi-instrumentalist known for his rich style and solid accompaniment. Travis has toured the US and internationally with The Stuart Brothers, Dirk Powell Band, Riley Baugus, the Reeltime Travelers, Martha Scanlan and step dancer Ira Bernstein.

Travis learned from old-time masters such Red Wilson, the Smathers Family, and Byard Ray. Besides being a renowned performer, Travis is also dedicated to teaching old-time music. He has taught the Junior Appalachian Musicians (JAM) program in Haywood County, NC since 2000. 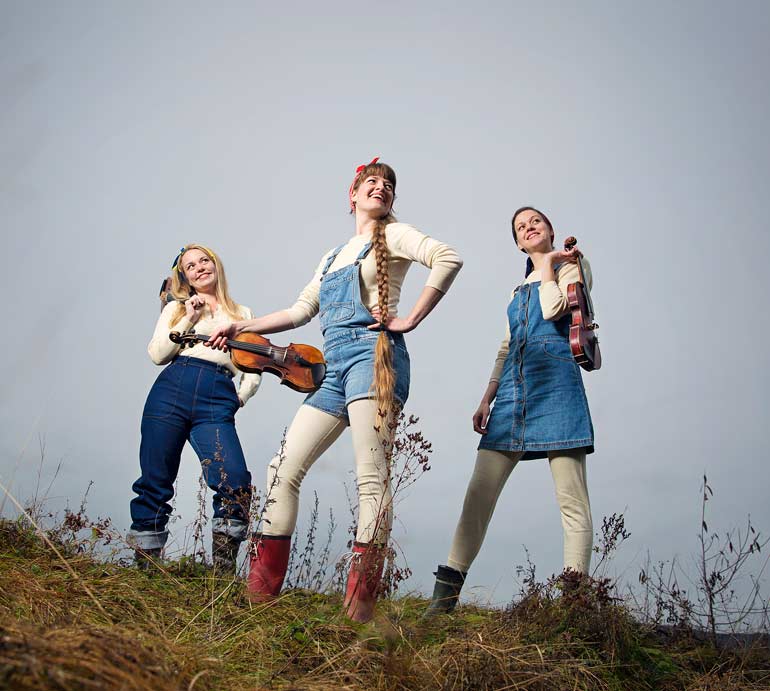 The music of Fru Skagerrak takes you on a journey through Scandinavia; from lowlands to mountains, from slow airs to lively polkas, in major and in minor, and everything in between. Fru Skagerrak– ”Lady Skagerrak” – are three master musicians – one from each Scandinavian country: Maja Kjær Jacobsen from Denmark, Elise Wessel Hildrum from Norway and Anna Lindblad from Sweden.

Denmark – Maja Kjær Jacobsen (fiddle) The fiddle playing and singing of Maja is beautiful and intense. She has performed in many different countries, presenting her passion – the traditional music and gorgeous songs of Central Jutland in Denmark. Her own compositions radiate a special power, and she can bring out cinematic soundscapes from both her more delicate tunes as well as the raw and breathtaking reels. Maja has a MS in Traditional Music from the Academy of Music, Southern Denmark in Odense (DK), and besides Fru Skagerrak she plays in the duo Maskineri with guitarist Søren Vinther Røgen, her own Maja Kjær Jacobsen Trio, and in the fiddle duo Maja & David (with Québec fiddler  David Boulanger). Maja also teaches fiddle, singing and dancing, and she is currently working on publishing a tune book with music from her home area.

Norway – Elise Wessel Hildrum (recorder, fiddle) grew up playing mostly classical music, but discovered the world of folk music at the age of 20 and decided that this was what she wanted to play. As a recorder player it was natural for her to learn the Norwegian “sjøfløyte” (sea-flute) tradition from Numedal. This has been the core of her repertoire through several years of folk music studies. She studied for two years in Rauland, four years at the Norwegian Academy of Music (as the only one to date to have done a folk music performance degree on the flute), she has been on exchange programmes to both Malmö (Sweden) and Newcastle (UK) and twice she has won the flute category in the national folk music competition. Elise also plays the fiddle, mostly for fun and in social settings. She can often be found in the middle of a jam session at festivals both at home and abroad.

Sweden – Anna Lindblad (fiddle) is a versatile fiddler from Sweden whose powerful fiddle playing is steeped in groove, joy and presence. Anna is just as old fashioned as she is innovative, and with a nod to the tradition she brings her music forward, blending all her diverse musical interests into a very special voice that’s all her own. With a heart beating for Swedish tradition she is not afraid to mix it up with other musical ways of expression. Besides her Swedish fiddling she also plays Québecois, Irish and Old-time, always with a smile and a contagiously positive attitude and spirit. Anna has a Master’s Degree in Swedish traditional music from the Royal College of Music in Stockholm, and is a member in Swedish folk pop band LYY, Anna Lindblad Trio, and Swedish folk big band Folk All-in Band (FAB). Anna is also frequently playing for traditional dancers and teaches fiddle classes both at home and at different workshops and camps. Fiddlin Earl White has been a prominent figure in the old time music and dance community for more than 40 years. He is one of the few Black Americans playing and perpetuating the music that was once an important part of black culture and black communities across the US.

He is an original and founding member of the famed Greengrass Cloggers and received his first fiddle in 1975. Earl’s energetic, rhythmic, driving style is attributed to many years of dancing with the Cloggers to the delights of Tommy Jarrell, the Highwoods Stringband, the Plank Road Stringband, and the Horseflies, to name a few.

His fiddling is as heartfelt as his dancing of earlier years.

Over the past 18 years the trad Quebec group Genticorum has become a fixture on the international world, trad, folk and Celtic music circuit. The band’s six albums met with critical acclaim in Canada, the United States and Europe, assuring the band a brilliant future. Firmly rooted in the soil of their native land, the energetic and original traditional ‘power trio’ also incorporates the dynamism of today’s North American and European folk cultures in their music. They weave precise and intricate fiddle, flute and accordion work, gorgeous vocal harmonies, energetic foot percussion and guitar accompaniment into a big and jubilant musical feast. Their distinctive sound, sense of humor and stage presence makes them a supreme crowd pleaser.

Pascal Gemme (fiddle) is a leading light in Quebec’s traditional music scene. Known as much for his original compositions as his fine interpretation of traditional tunes, Pascal is the fiddler, singer and arranger of Genticorum, whose CDs have met with critical acclaim in several countries. From a young age, the fiddle music and songs of his native province have captivated him.  After graduating with a degree in composition and band arrangements at Montreal’s St Laurent College, he immersed himself in the traditional music around him, playing, collecting and recording music found all over Quebec.  Pascal is now as much in demand as a teacher as a performer.   He has been teaching weekly at the Ecole des Arts de la Veillée in Montreal since 2003, as well as at music workshops and master classes around the world, including the Irish World Academy of Music and Dance in Limerick, the Goderich Celtic College, Alasdair Fraser’s Sierra Fiddle Camp, and recently the Quasitrad music camp in Australia.

Yann Falquet (guitar, button accordion) is a very active and creative acoustic guitar player on the Québécois music scene. He has explored many styles of music and completed a Bachelor’s degree in Jazz. Since then, he has developed a personal guitar style for Québec folk music, inspired by the playing of the accompanists of different cultures (Brittany, Scandinavia, Ireland, North America). His involvement in the province’s traditional music scene has brought Yann to perform on numerous recordings, and to tour regularly throughout Canada, the U.S., Europe and Australia with his main project Genticorum. He also toured for three years with the award winning Celtic and world group The McDades. Yann has taught his guitar style at the Irish World Academy of Music and Dance in Limerick, at the Goderich Celtic College as well as the Sierra Fiddle Camp.

Nicholas Williams (flute, accordion and piano) has developed a reputation as a versatile and sought-after musician in the traditional music scenes of Québec and New England.  His rhythmic yet nuanced style of flute playing draws from Irish and Scottish traditions, as well as from his studies of classical North Indian music.  After completing a BFA in world music and composition at York University, Nicholas moved to Québec in 2000, where he has enjoyed exploring the common ground of his own diverse musical experiences with the rich Québécois musical tradition.  An accomplished accordion and piano player, he has been a member of the band Crowfoot since 2005, plays with fiddler Laura Risk, and in the Alex Kehler & Nicholas Williams duo.