After an extensive nomination process and jury by committee, it is Centrum’s great honor to announce the awardees for the 2019-2020 Northwest Heritage Residencies. The six residencies, comprised of individuals and collaborative groups are:

These residencies, made possible through a National Endowment for the Arts “Our Town” grant are presented by Centrum in partnership with Fort Worden Public Development Authority (PDA). Between September 2019 and July 2020, these artists and makers will take up residence at Centrum for up to four weeks to develop and deepen their work with topics and cultural histories relevant to the people and environments of the Olympic Peninsula. Alongside their work they will present workshops, performances, demonstrations, and collaborative engagement with the community. Alice Gosti is an Italian-American choreographer, hybrid performance artist, curator and architect of experiences. Alongside her company members, she has been working in public spaces and exploring unconventional performances since 2013. Gosti’s work uses the world, landscapes, and pre-existing architectures as stages. Recent productions include How to become a partisan (Velocity Dance Center, 2015) and Material Deviance in Contemporary American Culture (On the Boards, 2018).

Gosti’s work has been recognized with numerous awards, commissions and residencies including being a recipient of the 2012 Vilcek Creative Promise in Dance Award, the 2012 ImPulsTanz danceWEB scholarship, a 2013 Bossak/Heilbron Award, part of the 2015 inaugural Intiman Theatre Emerging Artist Program as a Director, a 2015 Artist Trust GAP Grant, a 2015 and 2017 Seattle Office of Arts and Culture Award, a 2017 Artist Trust Fellowship, a 2016 NEFA National Dance Project Production and Touring Grant and, the inaugural Italian Council Grant from the Italian Government.

In 2013 she founded the Yellow Fish // Epic Durational Performance Festival, the world’s only festival dedicated to durational performance.

Alice Gosti and her dance company, MALACARNE, will be in residence in Spring of 2020 to research and develop a performance spectacle for a site in Fort Worden; exploring immigration, water as a propelling force, and the invisibility and visibility of diverse women in the history of the Northwest. Gosti’s residency will also feature a one-day movement and history workshop for youth and a public viewing of the group’s in-progress work.

Inspired by changing geological and biological forms and systems in the natural world, John works with his 20-member studio team to create large-scale site-specific immersive sculptural installations. Impermanence and chance are often central to the work along with kinetics and relationships between the natural world and architecture.

Grade is the recipient of the 2010 Metcalf Award from the American Academy of Arts and Letters (NY), a Tiffany Foundation Award (NY), three Andy Warhol Foundation Grant Awards (NY), two Pollock-Krasner Foundation Grants (NY), the 2011 Arlene Schnitzer Prize from the Portland Art Museum (OR), and the 2013 Arts Innovator Award from Artist Trust (WA).

Over a series of four weeks in Fall and Spring of 2020, Grade and members of his studio will use the residency to collaborate on designs for future projects that orient around aspects of the natural world of the Olympic Peninsula. Members of the public will be invited to participate in the conceptual development and process of fabricating a new sculpture. Cathy MacGregor (Jamestown S’Klallam) is a weaver and teacher dedicated to rediscovering the traditional techniques of her ancestors. Involved in artistic endeavors since an early age, she returned to tribal lands in 2009, seeking to learn more about her native culture and traditions. With support of her Jamestown S’Klallam Tribe, she took classes in basic cedar weaving and took to it quickly. In 2018, MacGregor was awarded an apprenticeship with renowned weaver Lisa Telford from the Native Arts & Cultures Foundation, one of eight awarded through the United States.

For the last 10 years, MacGregor has been part of the Tribal Journeys, which have become a second passion for her. This coming together of Tribes began in 1989 as part of a cultural resurgence among Northwest Coast Natives and First Nations. These journeys reaffirm traditions practiced for millennia and reawaken Canoe Culture for Tribal unity, self-confidence, and a spiritual remembrance of ancestors. MacGregor credits these journeys with leading to a deep connection to ancestors and a renewal of spirit.

For her winter 2019 residency, MacGregor will focus on cedar, the “Tree of Life” for her and her ancestors. She will practice traditional cedar bark weaving, including harvesting and processing, dying with native materials, and weaving one of her largest baskets to-date. Over the course of her residency, MacGregor will offer workshops to the public and a sharing of completed projects. 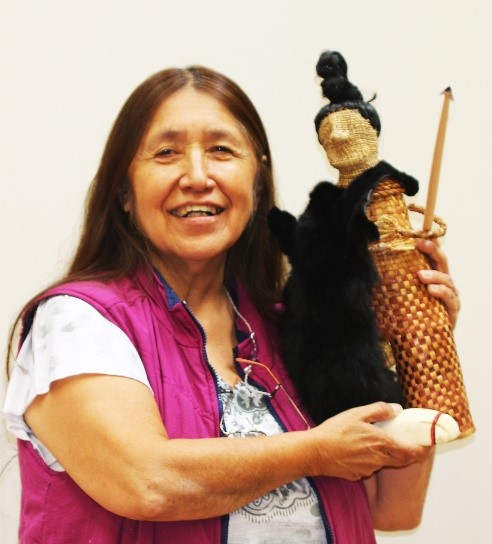 Theresa Parker’s (Makah/Lummi) earliest memory of basket weaving was age 5, while learning to make cedar mats with her Gramma Bertha. She credits her own weaving success to her Mother Leah and Grandmother Bertha Lane-Smith’s patience, as the skill was hard won. She uses traditional and contemporary basketry materials. Theresa is an Education Coordinator of the Makah Cultural and Research Center-24+yrs. She is one of the founding (1995) Board members of the Northwest Native American Basketweavers Association. 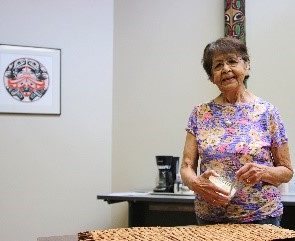 Parker and Markishtum are relatives and they have traveled for decades together, sharing their basketry, plant and traditional foods knowledge with many communities near and far (locally and nationally).

In fall of 2019, Parker and Markishtum will spread their residency time over a period of three weekends, dedicating their time to create cedar capes for their granddaughters. Two workshops and sharing of meals will allow community members to witness and learn about the Makah cultural histories, traditional food and weaving processes. 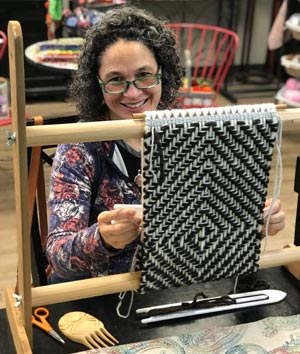 sa’ hLa mitSa, Dr. Susan Pavel first learned Coast Salish Weaving the summer of 1996. Each summer she would produce one ceremonial blanket and then gift it to various elders of the tribe. By the fourth year she was selling the weavings. By the seventh year she was invited to teach weaving classes and has taught over 2,500 students.

She has participated and later solo exhibited seven museum exhibits. With public and private collectors across the nation she continues to weave. 2016 marked 20 Years of Coast Salish Wool Weaving for her and more importantly – SQ3Tsya’yay –Weaver’s Spirit Power. 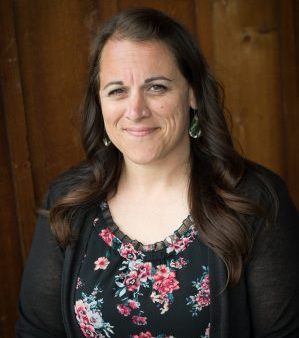 Kelly Sullivan (Port Gamble S’Klallam), is an apprentice Coast Salish Weaver to Dr. Pavel. In 2016 Sullivan learned to weave and began participating with Dr. Pavel in all aspects of weaving; from learning about gathering raw materials, spinning and dying the wool using local plants, then to produce woven pieces of all types with the various techniques. Together, they have helped bring a strong resurgence of Coast Salish wool weaving to the Port Gamble S’Klallam Community where many weavers and teachers are beginning to emerge.

At the beginning of 2020, Sullivan and Dr. Pavel’s residency will be used to tie the art form back to the land. They will focus on incorporating plant dyed materials and education around gathering materials and dying the fiber. They will offer public demonstrations and conversations with the community about their processes and techniques. 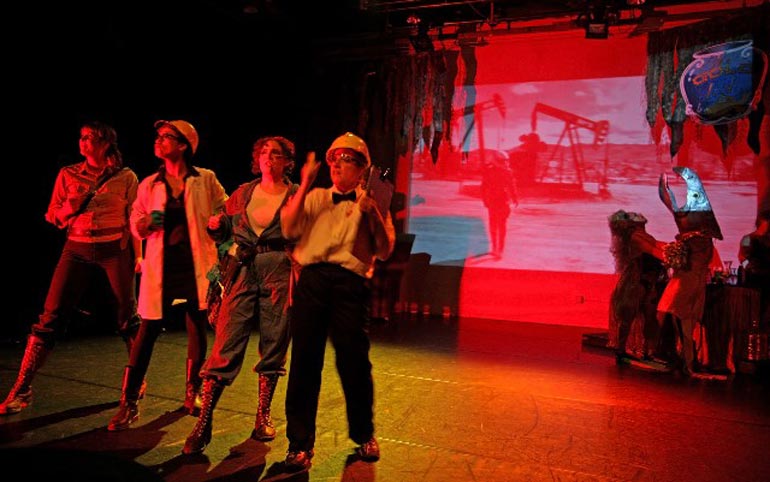 Cleo Woelfle-Erskine is a Seattle-based artist-scholar whose work includes photography, video, street theater, and scientific investigation as participatory performance. Cleo’s scientific collaborations with tribes and grassroots groups investigate projects to restore rivers and coastal zones to benefit salmon and recharge groundwater to adapt to changing climates, and have been funded by the Northwest Climate Adaptation Science Center and the National Science Foundation. Cleo is the author, most recently, of “Fishy Pleasures: Unsettling fish hatching and fish catching on Pacific frontiers” (Imaginations 2019) and the forthcoming monograph Underflows: Transfiguring Rivers, Queering Ecology (UW Press).

July Hazard is a poet from Kentucky who’s currently in Seattle, with parts left behind in a long list of cities, rivers, and truck stops on the way. July’s current research investigates the altered shorelines of the Black and Duwamish rivers, the assembly of poetic voice under the guidance of animals, and the forest relations of trans and queer youth in rural Appalachia. July teaches in the University of Washington’s Comparative History of Ideas Department and Program on the Environment.

Together, they collaborate with other artists, scientists, and activists to investigate hidden flows and suppressed ways of being, and to evoke new relations among people and the more-than-human world. Often, these collaborations form uprisings of an ever-shifting art & science collective called the Water Underground. Their shared work has been seen at venues ranging from derelict rail yards and street protests to museums and science conferences—including SomARTS, CounterPulse, the Crocker Museum, and the Henry Art Gallery, the Wild and Scenic Film Festival, and the San Francisco Transgender Film Festival, the Bay Delta Science Conference, on Sproul Plaza during Occupy Berkeley, and wheat-pasted around Oakland, California. Their performance installation “Tell A Salmon Your Troubles” won the inaugural Making and Doing Prize at the 2015 Society for the Social Studies of Science Annual Meeting.

Over the course of four weeks in 2019-2020, Woelfle-Erskine and Hazard will further develop “With and for the Multitude” / “Queer Shores” and “Talking to Birds about genocides / Talking to birds about resurgences.” Throughout the residency, they will conduct a series of field interviews, participate in tribal and citizen science field work, create temporary installations, and offer a field poetics workshop and public lecture.