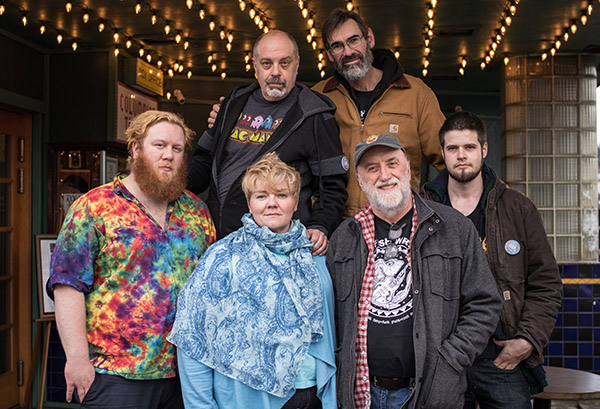 Direct from Ketchikan, Alaska, Ray Troll and the Ratfish Wranglers, will be performing at Port Townsend’s legendary Palindrome event center on Valentine’s night, Friday, February 14 at 7 pm. Tickets are $15.00 at the door with advance tickets highly encouraged due to limited seating. A no-host bar operated by Eaglemount Wineries will serve wine, hard cider and beer. This is a 21 and over event.

The Wranglers will be recording an all new album of their fishy music in early February as part of a Centrum residency at Fort Worden State Park. They’ll be debuting many of the new tunes at this special ‘one night only’ event. Be prepared for one of the most unique musical events to hit Port Townsend since dinosaurs roamed the earth and trilobites swam in the seas. They’re more fun than a bucket full of eels and remember “they throw the science in for free”. Bring your dancing shoes!

THIS EVENT IS SOLD OUT.

“Everyone should be in a band, regardless of talent or ambition” is a credo that Ray often spouts. Ray’s first o-fish-al band was called Zuzu and the Robot Slave Boys, an art-rock band formed with two of his professors Jim and Jo Hockenhull, during his MFA college days at WSU in the late 70’s. After moving to Seattle in 1981 Ray teamed up with his pals Michael Drew, Charlie Nathan and Toby Harris to form the“Bones of Contention”, who performed at exactly one legendary house party in the U-District and recorded one full length cassette of original tunes that was favorably reviewed in Seattle’s “Rocket” magazine.

After moving to Alaska, Ray soon had a twist of fate as a substitute art teacher in 1984 when he met a snarky young Russell Wodehouse and Shauna Lee. Russ and Shauna allowed their somewhat questionable substitute art teacher to join their band, the Squawking Fish. Thirty years later, the trio is still hitting the stage with a totally unique sound and off-the-wall visuals. In 2009 they renamed the group the Ratfish Wranglers.

The Ratfish Wranglers are a wily bunch of artist-musicians hailing from the town of Ketchikan that play what has been described as “sub-aquatic neo-folk, fish-punk-funk rock”. One never knows who’s going to be ‘wrangled’ into this band of pranksters but at its core are Ray, Russ and Shauna.They put on a fun and uniquely Alaskan show, complete with a “sockeyedelic” light show and a limbo bar set at nine inches.

Along the way the band has grown and tightened with the addition of masterful lead guitarist, Brian Curtis who brings his own flavor to the Wrangler sound. A veteran of numerous garage bands, folk festivals and many a fishing hole.

One of the most recent additions to the group is Chazz Gist who joined in 2015. A youngster amongst the vets but with classically trained fingers that fly across his custom made 7 string bass with the power and grace of players twice his age, he will take you to school with his hot bad ass licks. Fiddler “Jumping Joe” Baxter joins the group from time to time as well as the young and ultra talented percussionist Austin Hays.

Ray’s son Patrick Troll plays drums with the band when they tour down south in the “lower 48”. Patrick was just a small fry growing up at the fin of his dad, when he began to play music. He showed great promise from a tender young age and has mastered several instruments including guitar, drums and the turntable. His alter ego, DJALTERNATIVE, has a cult following on both radio and in clubs as he seamlessly blends techno beats, original music and tasty dance tracks to keep the party going. In addition to the Ratfish Wranglers, Patrick is a driving force in several other bands including Revilla and Whiskey Class. He makes his home in Seattle.