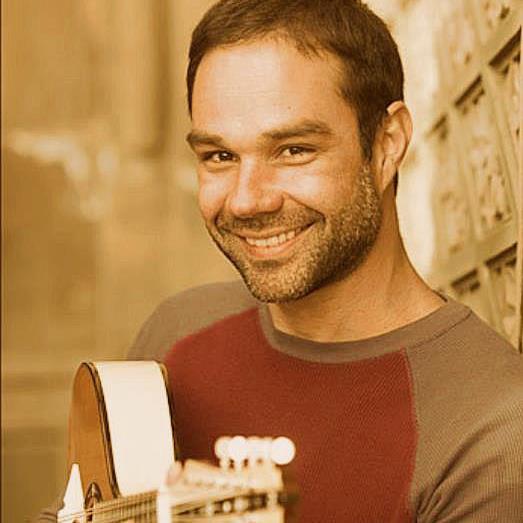 Join us online for a one-of-a-kind Choro experience Centrum’s International Choro Workshop is known for its remarkable faculty, all of whom will be back for our online version in 2021. You will join them for Special Topics sessions, instrumental master classes, and even a live-streamed concert. Plus you will receive three tunes recorded by them that you can play along with. This music is too much fun to let a virus get in the way.

FEATURING A FACULTY OF 6 MUSICIANS AND INSTRUCTORS

Our popular Choro workshop celebrates its 11th anniversary! This year’s workshop will be online due to COVID-19 restrictions. This new version has inspired us to think about how to make the most of online teaching and learning and we’re eager for you to experience it. Some of the most significant changes are:

Our world-class faculty is eager to work with you again, saying hello to familiar faces and welcoming new ones. Artistic Director Dudu Maia, (bandolim); multi-faceted Anat Cohen, clarinet; Trio Brasileiro members Douglas Lora, 7-string guitar; and Alexandre Lora, pandeiro/percussion; saxophonist/flutist Daniela Spielmann; and the incomparable Jovino Santos Neto. All are master teachers and outstanding performers who will show you how much fun it is to play Choro.

Choro is a great way for both jazz and classically oriented musicians to meet on common ground. There are written charts with lovely and lively melodies accessible to any competent player. There’s also room for improvisation, and in a vein that’s a great way for classical musicians to expand their skills in this. You should be proficient on your instrument, i.e. comfortable with the mechanics of playing. There will be people of different backgrounds and abilities.

What is Choro Music?

The Brazilian musical style of Choro represents the coming together of European melodic and harmonic traditions with African rhythms and sensibilities. Emerging in Brazil in the middle of the nineteenth century, Choro is a cousin of jazz, with a sense of yearning that is often described as a “sweet lament.” Many ethnomusicologists believe that the name Choro comes from the Portuguese verb chorar—that is, to weep or to cry. It often seems bright and happy on the surface, but if you dig deeper you’ll find a kind of sadness, a longing that Brazilians call saudade.

Something about the combination of Portuguese and Italian influences resulted in melodies with a strong romantic feeling. When joined with its African influences, Choro has an irresistible groove and rhythmic momentum that is uniquely Brazilian. (Read more about Choro).

What Are the Costs? Dudu Maia brings a lifetime of research and study of Brazil’s greatest musical traditions to his work. A virtuoso of the bandolim (a Portuguese version of the mandolin), Dudu served for five years as the bandolim professor of Brazil’s most respected Choro school, the Escola Brasileira de Choro Raphael Rabello in Brasília. He is known for his soulful style, unique touch and his mastery of the 10-stringed bandolim, which has two more strings than the standard bandolim, expanding its musical range and harmonic possibilities. He has developed his own method of teaching the bandolim and travels extensively throughout the world teaching and performing.

Dudu also hosts the nationally broadcast TV show Programa Casa do Som which is recorded in his home studio. The show features recording sessions and interviews with outstanding musicians from Brazil and abroad and is available on its own YouTube Channel.

In addition to his solo career, Dudu is a member of the groups Caraivana, Aquattro and Trio Brasileiro and has served as Artistic Director of Centrum’s Choro Workshop since 2011.

ANAT COHEN – CLARINET
Anat Cohen has been declared Clarinetist of the Year by the Jazz Journalists Association every year since 2007 and has also been named the top clarinetist in both the readers and critics polls in DownBeat for multiple years running, and in 2009, ASCAP awarded her a Wall of Fame prize for composition and musicianship, among other honors.

In October 2017 –Happy Song – the debut release from the Tentet found her drawing on diverse musical loves, from Brazilian music to African grooves, from vintage swing to touching ballads. In many ways, Happy Song carried on from an initial highpoint of her discography, 2007’s sumptuous Noir, which saw Anat weave her various horns through the all-star Anzic Orchestra, arranged and conducted by Lev-Ari. Billboard magazine marveled over the “cinematic feel” of Noir, with The Washington Post praising Lev-Ari’s arrangements as “wonderfully textured and evocative.” The Tentet of Happy Song boasts a different sort of richness, one that’s full but also fleet and fizzing, with an open, jazzy energy. The beautiful arrangements are by both Anat and Lev-Ari, with the latter directing the band.

Having first appeared at the Newport Jazz Festival in 2007, she had the honor of being the music director for the Newport Jazz Festival Now 60! all-star band that toured the U.S. on the occasion of the festival’s 60th anniversary in 2014. In 2017, Anat played all the major European festivals as part of the all-star, all-female band called ARTEMIS.

Anat teaches the fine points of jazz and the music of Brazil to students across North America, including recent residencies at Stanford, Oberlin, Michigan State University, University of California-San Diego, the Centrum Choro Workshop and California Brazil

Camp. About her experiences onstage, in the classroom or just engaging with her listeners, Anat says: “Any day when I get to share music with people – other musicians, an audience – feels like a celebration to me.” 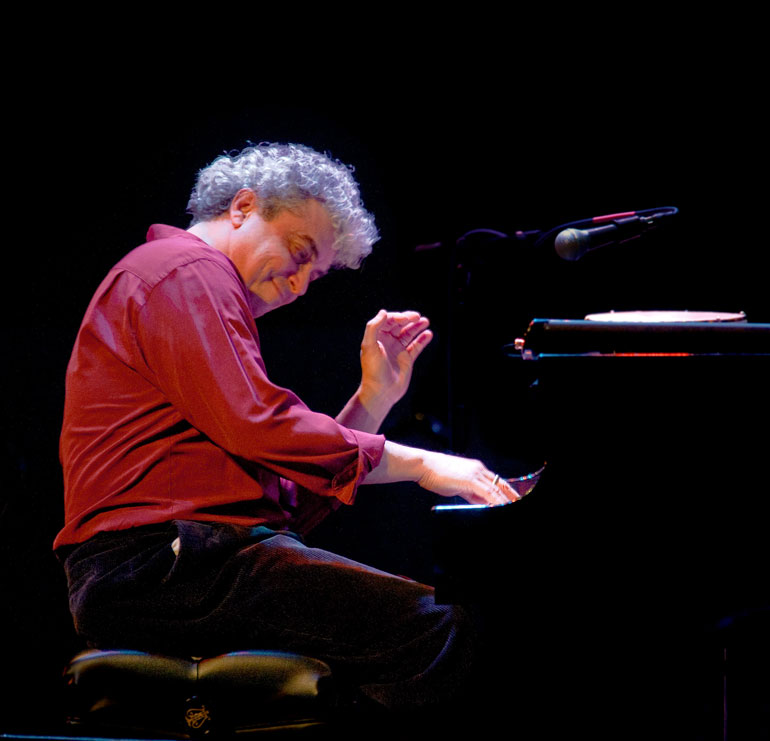 Three-time Latin Grammy nominee Jovino Santos Neto, a master pianist, composer and arranger, is among the top Brazilian musicians working today. Currently based in Seattle, Washington, he has throughout his career been closely affiliated with the Brazilian master Hermeto Pascoal. He was an integral part of Pascoal’s group from 1977 to 1992, where he fine-tuned his artistry, performing around the world and co-producing several legendary records.

Currently, Jovino leads his Seattle-based Quinteto and teaches piano and composition at Cornish College of the Arts. He can also be heard around the world as a piano soloist, working with symphony orchestras, jazz big bands, chamber music groups, and in collaboration with musicians such as his mentor Hermeto Pascoal, Bill Frisell, Paquito d’Rivera, Airto Moreira, Claudio Roditi, David Sanchez, Joe Locke, Marco Granados and many more. Composer and guitarist Douglas Lora moves with versatility between classical and popular music, and has been established as one of the most prominent artists of his generation. A member of the Brasil Guitar Duo (with Joao Luiz) for more than fifteen years, and seven-string guitarist of the choro and samba band Caraivana, Douglas Lora has a full touring schedule worldwide, and has collaborated with artists including Paquito d’Rivera, Marco Pereira, Jovino Santos Neto, Ney Rosauro, Marina Piccinini, and many others.

In 2011 he joined his brother, percussionist Alexandre Lora, and mandolin virtuoso, Dudu Maia, to form an ensemble dedicated to Brazilian traditional music, Trio Brasileiro. Lora has performed as a soloist with the Dallas Symphony, Houston Symphony, Dayton Philharmonic, Orquesta Metropolitana of Sao Paolo, and the Orchestra of the Americas. Critics and audiences around the world have praised his recordings with the Brasil Guitar Duo, and distinguished artists and chamber ensembles have recorded his compositions.Douglas Lora studied composition and classical guitar at Faculdade de Artes Alcantara Machado in Sao Paolo and received a Master’s Degree in Performance from the University of Miami. Lora was a winner of the Concerts Artists Guild Award in 2006 with the Brasil Guitar Duo, and has eight recordings and five original film soundtracks to his credit. Alexandre Lora moves easily within different styles of Brazilian popular music, performing as a drummer and percussionist. He has been on the faculty of Centrum’s Choro Workshop since 2012. He has performed extensively in Europe including Amsterdam, Rotterdam and a tour of 33 cities in Spain. With Trio Brasileiro he has performed in major US cities such as New York, Chicago, Boston, Seattle, Miami and Portland.

Alexandre has collaborated with accomplished musicians such as Anat Cohen, Jovino Santos Neto, Martin Fondse, Mestrinho, Ramón Valle, Mariana Aydar, the Brazil Guitar Duo and Ney Rosauro. In 2015 he has released his first solo CD, Oriente, featuring all original compositions. On it Alexandre plays the Hand Pans as the main instrument, and brings a new approach to musical composition.

Alexandre received his Bachelor’s degree in drumset performance in 2002 at FAAM (Faculdade de Artes Alcântara Machado), and his Master’s degree in Musicology and Music Education at the UAB (Universidad Autónoma de Barcelona) in 2009. He has also studied classical percussion for 3 years at the EMM (Escola Municipal de Música de São Paulo). Daniela Spielmann has been part of the Brazilian choro scene since 1998 as a saxophonist, flutist, composer and arranger. Her music is current and at the same time respectful of the great Brazilian composers of the past. Her first CD as a member of the choro ensemble Rabo de Lagartixa (Gecko´s Tail) was given a critics’ the best instrumental CD of the year and in 2002 her first solo album, Brazilian Breath, was nominated for a Latin Grammy. Since then she released seven CD’s, the newest of which, Sopros Brasileiros will be out in 2017.

Daniela has participated in numerous festivals internationally and for 15 years was a member of the band on TV Globo’s Altas Horas, giving her the opportunity to perform with many leading artists. She is also an enthusiastic teacher and researcher and currently has a position in Rio de Janiero working with children and young adults. She received her Master’s in 2008 and her doctorate in 2017 with a thesis about gafieira music and its relationship with groove music and dance.

About her choro playing she says “I try to express the love I feel for life and for people through my playing. The vibrant rhythms, harmonies and melodic structures of this music can be heard in pubs, street festivals and our jam sessions called “Roda de choro.” It’s the expression of our popular culture. I want the whole world to hear it.”