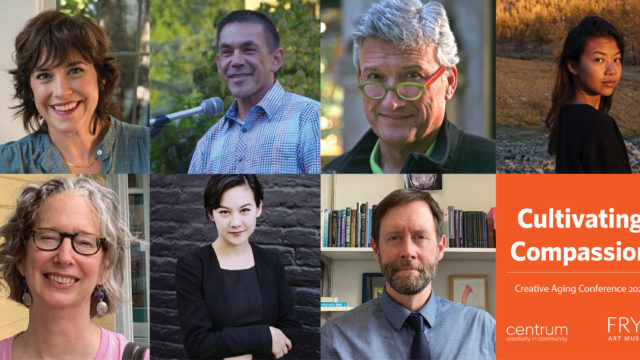 The Frye Art Museum and Centrum present the 2021 Creative Aging Conference, a virtual program designed for lifelong learners and professionals from diverse disciplines. Rooted in a discussion of compassion and empathy, the conference will focus on how we care for ourselves, each other, and the natural world. Speakers from multiple disciplines and life experiences will offer perspectives on the many ways we seek and build connections across time, culture, and language.

$50 for Centrum donors and $65 for non-donors
Continuing education clock hours are expected to be available.
Questions? Contact education@fryemuseum.org

Cultivating Compassion in the 21st Century

Neurosurgeon James R. Doty, MD has dedicated his life to unraveling the mystery of the link between our brains and our heart. As Founder and Director of the Center for Compassion and Altruism Research and Education (CCARE) at Stanford University, Dr. Doty collaborates with scientists from a number of disciplines to closely examine the physiological and psychological correlations of compassion and altruism. He also oversees the development of a variety of techniques and programs to address issues of stress, anxiety, depression, and burnout. Dr. Doty will discuss his work with neuropsychologist Kristoffer Rhoads, PhD., University of Washington School of Medicine, sharing research as well as excerpts from his New York Times bestseller Into the Magic Shop: A Neurosurgeon’s Quest to Discover the Mysteries of the Brain and the Secrets of the Heart (2016), a part memoir, part scientific exploration on the power of compassion and kindness.

James R. Doty, MD is a clinical professor of neurosurgery at Stanford University and founder and director of the Center for Compassion and Altruism Research and Education (CCARE). He is Senior Editor of the Oxford Handbook of Compassion Science (2017) and is the author of Into the Magic Shop: A Neurosurgeon’s Quest to Discover the Mysteries of the Brain and the Secrets of the Heart (2016), the New York Times bestseller, which has been translated into 40 languages. Dr. Doty serves on the board of several nonprofits and is the former vice-chair of the Charter for Compassion International and former chair of the Dalai Lama Foundation.

Dr. Kristoffer Rhoads, PhD is a neuropsychologist at UW Memory and Brain Wellness Center and an Associate Professor of Neurology at the University of Washington School of Medicine. He specializes in the evaluation and rehabilitation-oriented treatment of dementia and related disorders. Dr. Rhoads currently serves as co-director of Project ECHO- Dementia and is Chair of the Health and Medical Subcommittee of the Dementia Action Collaborative, tasked with developing and implementing a state plan for Alzheimer’s disease as well as disseminating the standards for dementia-related healthcare in Washington State. Since 2018 he has served as the facilitator of the Frye Art Museum Mindfulness Meditation sessions.

Living Lullabies illuminates critical issues facing women and children through the multidisciplinary storytelling of families’ nighttime rituals, offering stunning photographs and audio clips of lullabies from around the world. Photographer Hannah Reyes Morales explores how parents and caregivers prepare children for sleep in environments fraught with risk and the unique and timeless role of the lullaby as a vector for sense- and place-making. Her project, featured in National Geographic (December 2020), follows families from around the world, including mothers protecting their children from toxic air in Mongolia; families escaping conflict from Syria and taking refuge in Turkey; teen mothers relying on their communities in Liberia; families grappling with the climate crisis in the Philippines; and essential workers isolating from their children in the USA amidst the COVID-19 pandemic. Living Lullabies demonstrates how issues at the top of global agendas–conflict, migration, public health, and climate change–affect and are reflected in the stories of bedtime for children around the world.

Hannah Reyes Morales is a Filipina photojournalist whose work documents tenderness amidst adversity. Her photography examines how resilience is embodied in daily life. Through her photography she has reported on forced marriages in Cambodia, documented women’s experiences with assault in the ongoing conflict in South Sudan and explored the long-term effects of colonization on women’s bodies in the Philippines. Recipient of the ICP Infinity Award for Documentary Practice and Visual Journalism, Morales was a National Geographic Explorer and named a cultural leader by the World Economic Forum in its ASEAN forum. Her work has appeared in the New York Times, Washington Post, and National Geographic, among other print and online publications. She is currently working on projects focused on safer space-making and caregiving.

How are food and memory linked? How can sharing foods help reinforce connections both familial and cultural? How does the creative act of preparing food connect to other artistic pursuits? We will explore these questions and more with Michelle Zauner, whose best-selling memoir Crying in H Mart (2021) won widespread praise for its open exploration of grief and growth. Her memoir describes the death—when Zauner was 25—of her Korean mother, and dives deep into the power of food to summon both personal memories and to connect across cultural and linguistic boundaries. Zauner, also celebrated as a singer and guitarist who creates under the name Japanese Breakfast, will be joined in conversation by Sara Dickerman, a Seattle-based food writer.

Michelle Zauner is best known as the lead vocalist and songwriter of the indie band Japanese Breakfast. She has won acclaim from major music outlets around the world for releases like Psychopomp (2016) and Soft Sounds from Another Planet (2017), and most recently, Jubilee (2021). Zauner’s nonfiction has been published in The New Yorker, Harper’s Bazaar, and Glamour. Her debut book Crying in H Mart (2021) is planned to be adapted into a feature film by Orion Pictures with Zauner providing the soundtrack.

Sara Dickerman is a James Beard award-winning food writer whose work has appeared in The New York Times, Slate, and Bon Appetit. She is the author of four cookbooks, including Secrets of Great Second Meals (2019) about reimagining leftovers, and Getaway (2021), a collection of travel-inspired recipes from Seattle chef Renee Erickson. Her perspective as a writer and cook is informed by being a working mother and a care partner to her mother who is experiencing a degenerative disease.

The southern resident orcas that frequent Puget Sound offer a model for aging as a creative and sustaining force. Amid the southern residents, the females that lead the J, K, and L pods are among only six mammals on earth, including humans, with a long post-menopausal life stage. Scientists have documented that the evolutionary value of “The Grandmother Effect” includes aiding younger mothers in learning care for their young, babysitting, and sharing their catch. During tough times it is the matriarchs, using their vast ecological knowledge, that lead the pods to fish. Lynda Mapes, environment reporter at The Seattle Times and author of Orca: Shared Waters, Shared Home (2021), will team up in a talk with Lummi Nation fisherman Jay Julius, who will reflect on the role model the matriarchs provide in the culture of the Coast Salish People, who regard the orcas as family members and call them by their traditional name of quel lhol mech ten: the people who live under the sea.

Lynda V. Mapes is a reporter at The Seattle Times, specializing in coverage of the environment and indigenous people, and an associate of the Harvard Forest of Harvard University, in Petersham, Massachusetts. She is the author of six books, including Orca: Shared Waters, Shared Home (2021), and Elwha: A River Reborn (2013). Mapes is a two-time team winner of the international Kavli Gold Award for science journalism from the American Association for the Advancement of Science. She lives in Seattle.

Jay Julius is co-founder/president of the Indigenous nonprofit Se’Si’Le and former Chairman of Lummi Nation. He was a leader in Lummi Nation’s successful fight to protect Xwe’chi’eXen (Cherry Point) against what would have been North America’s largest coal port. As a fisherman, father, and proud Tribal member, he upholds his Xa xalh Xechnging (sacred obligation) by continuing to advocate for the Salish Sea by working with other leaders and by speaking widely about the connections between culture, Treaty rights, sovereignty, and climate change.

A limited number of scholarships for the 2021 Creative Aging Conference are available at a reduced rate. Scholarships are awarded on a first-come, first-served basis. Please see registration form for details.