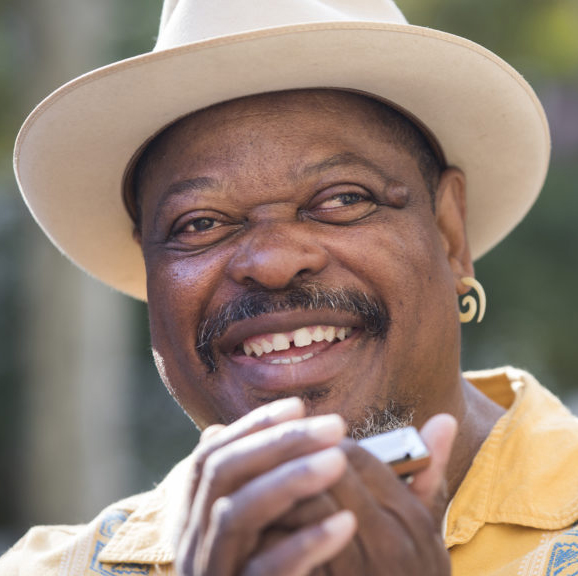 Each year, Centrum’s board selects a most deserving community volunteer, advocate, musician or artist to receive its Centrum Champion award, and a commemorative plaque is added for display in the McCurdy Pavilion. For 2021, the Board has named two worthy recipients—Phil Wiggins and Jim Wilke.

PHIL WIGGINS (above) is an internationally-heralded blues musician, teacher and the first Artistic Director of Centrum’s Port Townsend Acoustic Blues workshop. He is a two‐time winner of the prestigious W.C. Handy Blues Foundation award and an NEA National Heritage Fellow. Today, he is the only living player of the harmonica to hold the prestigious honor of being a “Master of Traditional Arts.” Often referred to by its unofficial designation as “Living Cultural Treasure” award, the fellowship honors and preserves the diverse cultural heritage in the United States.

In the truest sense, Centrum’s Blues festival was started because of Phil Wiggins and his late performing partner, John Cephas. An outstanding and generous musician, Phil is also a composer of songs, adding to the Piedmont Blues legacy with a truly contemporary message, most recently about the shooting death of Ahmaud Arbery. He brings a genuine humanity to his music. His presence is gentle and powerful. JIM WILKE has been a friend and ally to Centrum since its earliest days. For many years, he hosted a nationally-syndicated radio show, Jazz After Hours. He frequently broadcast recordings made from Centrum’s mainstage and club performances, always crediting Centrum and Jazz Port Townsend. Later he produced Jazz Northwest, still on the air, which features Centrum performances even more prominently.

For decades Jim served as emcee for our mainstage jazz concerts. Together with his wife, Judy Cites, Jim has been a generous and loyal contributor to Centrum, and he recently conferred his digital archive of all of his Centrum recordings to our organization to help complete our archive in advance of our 50th anniversary in 2023.

The Centrum board and staff are thrilled to name these two champions as our honorees for 2021.