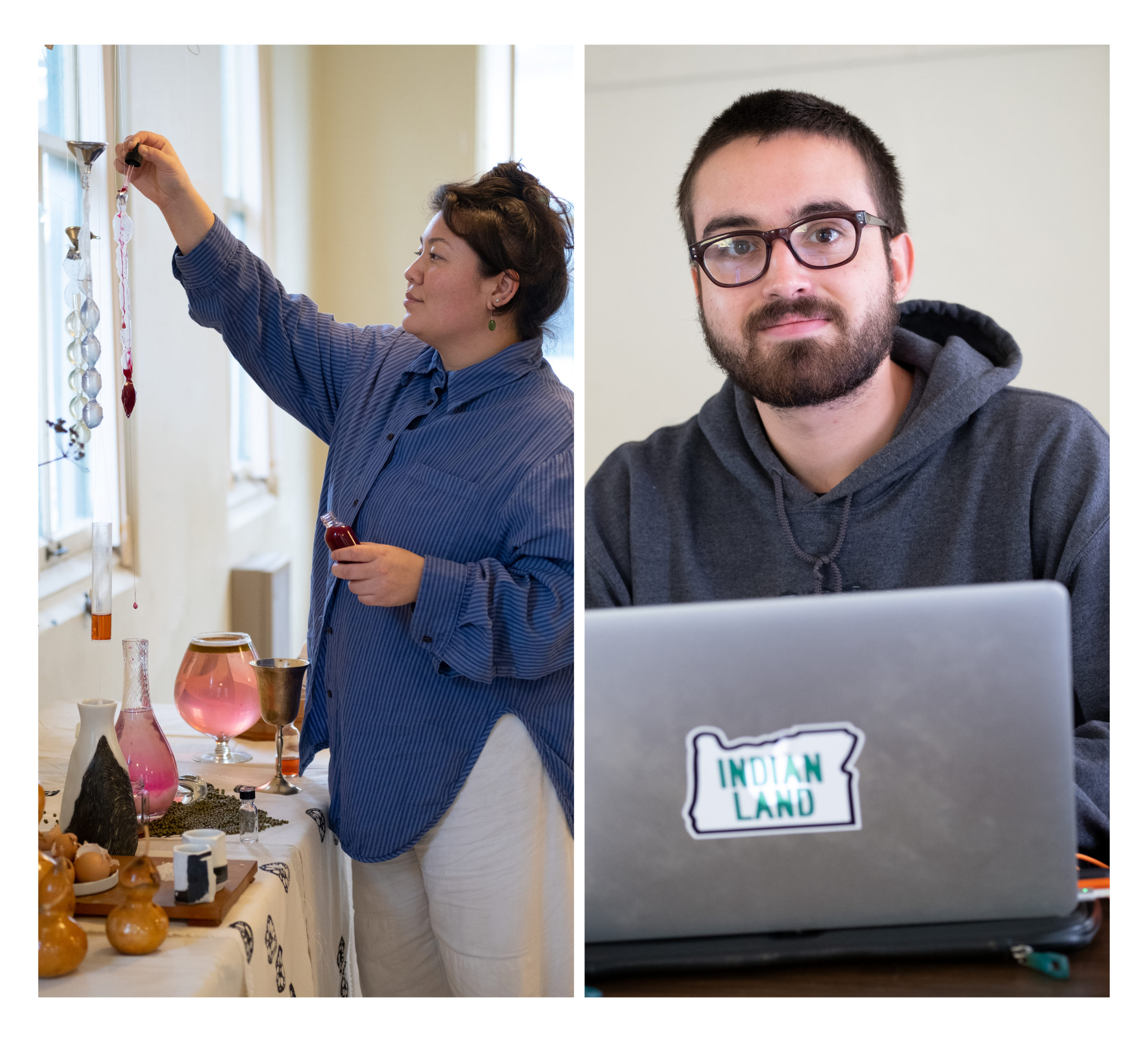 In October 2021, six artists were juried into Centrum’s Emerging Artist Residency and received stipends, housing, and studio space for one month at Fort Worden State Park. Artists paired up towards the end of their residencies to chat with one another about what they were working on and thinking about after weeks of being in residence.

Mel Carter and Woodrow Hunt kick off this series and chat about the ways that expectations changed because of the location and openness of the residency. They share thoughts on the history of the Fort as it relates to colonization and the ongoing stories that are unfolding and full of potential. Carter and Hunt discuss the ways that research and daily practice connect them to experiments and research into liquid spells, healing medicines, and tattoo practices specific to their cultural ancestries.

Mel Carter is a Yonsei (fourth generation) Japanese American and non-binary femme based in Seattle on Coast Salish and Duwamish lands. Experiences within the Japanese diaspora, queerness, exploration in modern witchcraft, rituals, and mythology inform their art practice, working in tandem with waste reduction and environmental justice in the cultural context of the Pacific Northwest.

Dropping through actions of the everyday mundane and focusing on the inherently magical properties of domestic spheres, their work is influenced by marine ecosystems, elements from fables, and traditional Japanese imagery. With a refusal to work within a specified medium, impermanent materials for mortality like food and plants are often used combined with elements of sculpture, garments, and textiles within a performance or installation.

Woodrow Hunt is an artist of Klamath, Modoc and Cherokee descent. Woodrow was born and raised in Portland, OR where he is currently making work. Woodrow’s film practice is focused on documentary and experimental forms. His experimental work explores the functions and relationship between digital video and memory and the ways digital video can communicate issues related to the Native community. His film production company, Tule Films, provides video services to Tribes, Native businesses and organizations, or to projects which collaborate directly with the Native community; many of which are focused on education. His films have screened at the Portland International Film Festival, Ann Arbor Film Festival and other festivals internationally including his most recent screening at MoMA DocFortnight 2021. His work has been included in the ArtForum print article “Artists’ Artists 2020,” the Boston Art Review, and Hyperallergic’s online articles about COUSIN Collective. Woodrow and his creative collaborator Olivia Camfield (Mvskoke Creek) are featured artists of COUSIN Collective.