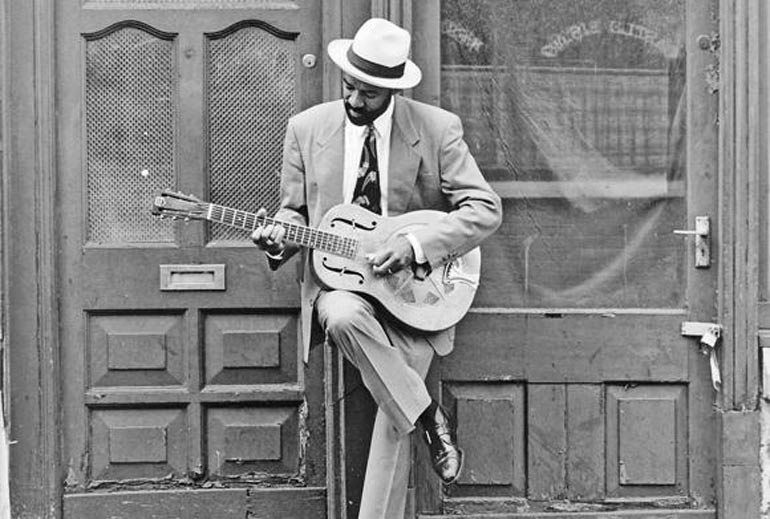 The Centrum Country Blues Intensive is held at Fort Worden State Park in Port Townsend, Washington, one of the Pacific Northwest’s most stunning and inspiring landscapes. Participants will gather in Officer’s Row housing and study with two masters of Country Blues Traditions.

At the Country Blues Intensive, John Miller and Michael Roach will be working to develop your abilities as an all-around musician in the style,  becoming comfortable singing, playing, and singing while playing, working in a lead or accompanist capacity, and feeling confident joining in and playing on songs you’ve never heard before, learning them as you play.

Each instructor will offer two solo classes per day, one morning session apiece which will meet at different times, early afternoon classes that will meet simultaneously, and a late afternoon team-taught session.  Evening time will be available for small jams, discussions of the music and visiting, as the participants see fit.

Michael Roach – sings and plays guitar in an East Coast style of blues that dates back to the 1920s. After spending several years learning directly from such well known figures as John Jackson, John Cephas and Jerry Ricks, Michael has developed his own style. As a cultural arts performer, Michael has promoted African-American culture through the use of blues music. He has lectured for the Smithsonian Institute (USA), Oxford University (UK) and more recently at the University of Metz (France). Michael is the Director, Guitar Instructor and Vocals Teacher for the annual Blues Week program in the UK.

John Miller – was inspired to take up the country blues guitar after seeing Mississippi John Hurt at the 1963 Philadelphia Folk Festival.  He taught himself to play guitar by listening to records and recorded his first album in 1973.  Since then, he has come to be recognized as one of the foremost authorities on country blues guitar.  John has released 12 instructional videos on the music of Furry Lewis, Bo Carter, Robert Wilkins, Elizabeth Cotten, John Hurt Vols 1&2 and Memphis Blues amongst others. John Miller’s solo classes will be drawn from the following list of topics: The schedule is is still under development but here’s a general idea of what to expect:

Check-in at 4pm / Dinner at 6pm / Orientation at 7:30pm followed by a Welcome Reception, bring your instrument.

Farewell Breakfast / Room check-out by 11am

*Your workshop registration entitles you to entrance to the public concert.

This workshop is limited to thirty people and will focus on guitar and singing while accompanying on guitar. This workshop is intended for people who have a reasonable degree of skill on their instrument. You should be able to play several songs at a snappy tempo, without pausing to contemplate finger placement.

Centrum welcomes young musicians whose ability meets the above criteria. If you are under 18 you must be accompanied by a registered adult or a registered chaperone.

If you have questions about whether this workshop is right for you, please contact Mary Hilts, Program Manager at mhilts@centrum.org, or call 360.385.3102 x 116.

Tuition: Cost of the Country Blues Intensive is $350. This includes admission to all workshop activities, and the public performance.

Housing: is optional, cost for a Private Room in Officer’s Row: $365

Scholarships: There is no scholarship fund for this program.

Under 18: Centrum encourages young artists to attend the intensive. Participants who are under-18 must be accompanied by a chaperone and will be required to sign a Centrum Student Contract.

Chaperones: Must be 21 or older. If not participating, there is a no-cost option in our registration type drop down for Chaperones. If the under-18 is staying in housing, their chaperone will need to also stay in the house and pay for their own room and board.

Climate: the Pacific Northwest can be chilly. Please remember to bring a sweater, sweatshirt or jacket.

Smoking: As posted within Fort Worden, smoking of any kind is prohibited by state law inside any public building or within 25 feet of any public building entrance including windows and ventilation intakes. Regarding the recent legalization of marijuana and the passage of I-502, Washington state law only allows the displaying or consuming of marijuana or a marijuana-infused product on private property. Under no circumstances is such use permitted outdoors at Fort Worden, in public spaces at the Park, or within any building at Fort Worden State Park. State park rangers will enforce the law. Thank you for abiding by Fort Worden State Park policy while you are a guest at Centrum’s programs.