Rachel Manke has been playing the ukulele for over 20 years.  It’s the passion that has fueled adventure and friendships in her life.  She is a skilled player in a vaudeville vein who has taken flourish and technique from that stage into various genres. She has appeared on stages that range from the New Jersey Uke Fest and Strummin’ Man to Garrison Keillor’s A Prairie Home Companion. A little bit country, a little bit everything else, a whole lot of funny, and a touch of sentiment.

Rachel started in the late 90’s on a $25 Hilo soprano and came to the uke world via the founders of the Ukulele Hall of Fame Museum. She first studied with Joel Eckhaus, directly learning from the well known student of the famed Roy Smeck. Ever since, she has continued to learn and perform, and is now a respected teacher as well, having taught at camps such as California Coast Music Camp, Puget Sound Guitar Workshop and the Port Townsend Uke Fest.   She has a penchant for Tin Pan Alley, old-time music, and is a master of the old-school uke chord solo flourish. Brook is an atavistic dinosaur of 20th century pop. His songs evoke a timeless blend of soul, surf & psychedelia. He is a skilled player on guitar and ukulele. He used to do a show called “Abbey Road On Ukulele”. As a youth, he liked the Guess Who, Sly & the Family Stone, Cat Stevens, and John Prine.

In 2021 Brook made two surf music albums, “Surf Monster” and “Surficana” with his band, “El Borko ¡Surf!”. His solo albums “Ready To Burn” and “Fountain Of Love” explore the idea that people are basically good, and that in every heart there is a source of strength, courage and love. Nikki Dee is an award-winning vocalist, vocal coach, ukulelist, music director, and bandleader based in Honolulu. She currently plays ukulele and sings with several music projects including the Django-inspired swing band Gypsy 808 and her own Hawaiian/Brazilian “tropical jazz” band, Blue Hawaiian. In 2017, Nikki represented the Seattle jazz scene in Kobe, Japan as the SKSCA Vocal Jazz Queen and was an Earshot Jazz Award finalist for NW Vocalist of the Year. Specializing in a unique blend of international jazz, blues, and cabaret repertoire in the original languages, Nikki has performed across the U.S. and overseas in France, Italy, Japan, Taiwan, and Australia.

Nikki has been a voice, ukulele, and piano teacher for over two decades in both private and classroom settings. She was the Hawaiian music and ukulele teacher for a Seattle-based hālau hula for several years, also performing as a hula dancer. Ukulele styles taught include vintage jazz, gypsy swing, reggae, classic Hawaiian, Hapa-Haole, samba (“cavaquinho” style), and Bossa Nova – not to mention popular sing-along styles such as pop, rock, disco, and R&B.

In her free time, Nikki enjoys scoping out new craft cocktail bars and restaurants, practicing calligraphy and yoga, snorkeling, hula dancing, and planning out lengthy international voyages. She is totally obsessed with her adorable niblings (niece and nephews) and loves teaching them to sing and play the ukulele. You can follow her latest music and travel adventures below:
Instagram: @DeevaMusic
//YouTube.com/DeevaMusic From his simple beginnings in Honolulu to his life amid the hustle and bustle of Los Angeles, Daniel Ho has worked over the years as a musician, producer, singer/songwriter, arranger, composer, engineer, and record company owner. The most compelling of these roles has been as a six-time GRAMMY Award winning producer, featured slack key guitarist, and artist in the “Best Hawaiian Music Album,” “Best Pop Instrumental Album,” and “Best World Music Album” categories. Ukulele Magazine calls him “Hawaii’s greatest contemporary musical ambassador.”

Daniel has toured throughout the U.S, Japan, Korea, Taiwan, Brunei, Thailand, Europe, and Australia. He has served as an American Cultural Ambassador at U.S. Embassies; been featured with the Honolulu Symphony; authored nine music books; and toured as a clinician for YAMAHA Guitars.

With the continued popularity of the ‘ukulele, Daniel’s original song, “Pineapple Mango (The Breakfast Song),” has risen to fame as an instrumental anthem plentifully covered by ‘ukulele enthusiasts around the world on YouTube. 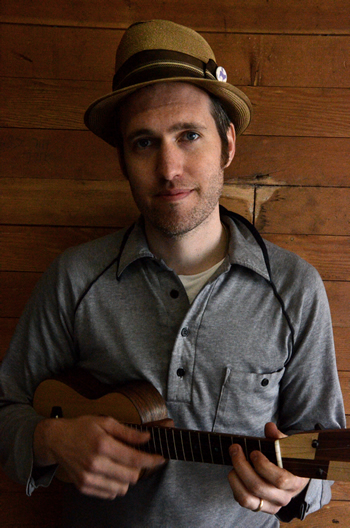 Aaron Keim is a historian, banjo picker, ukulele ambassador, old time songster, luthier and author. Aaron has been teaching ukulele and banjo techniques and performing at festivals since 2004. As an educator with a bachelor’s degree in Music Education and a master’s degree in Musicology, his true talents lie in his ability to adapt instruction to fit a wide range of learners and learning styles. Aaron is an ambassador for old time folk music in the ukulele world, adapting banjo and guitar techniques to the ukulele (including playing in the “clawhammer” tradition). His YouTube instructional videos have gained a worldwide following and have led to teaching and performing opportunities in N. America, Europe and Australia.  Aaron is also a luthier, building as Beansprout Musical Instruments since 2007. www.thebeansprout.com He plays in a duo with his wife Nicole called The Quiet American and a string band called The Junebug Boys. Nova Karina Devonie hails originally from Vancouver, B.C. She has been delighting audiences with her sensitive (and sometimes humorous) accordion playing, sonorous singing style, and sideways fashion sense since the 1980’s.

Nova moved to Seattle to join swingabilly cowgirl band Ranch Romance and stayed to make it her home after that band ended their touring days. She now teaches private accordion lessons and performs regularly with several bands including Miles and Karina, The Buckaroosters, and The Rare Birds. 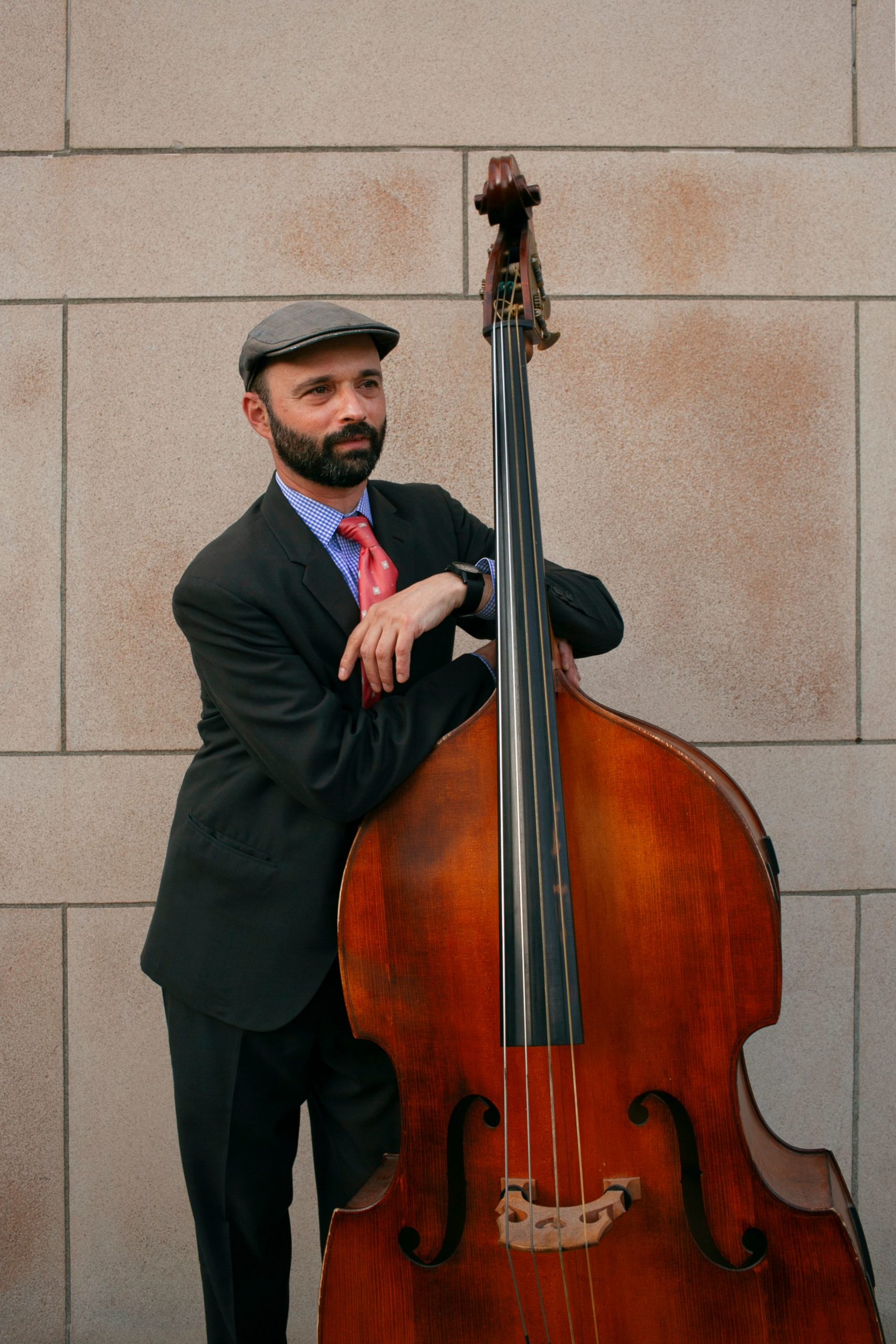 Big tone and solid rhythm have made Matt Weiner one of the busiest bass players in the Northwest.  Inspired by the “prebop” bass players and their music, he’s slapping out a syncopated jazz feel on one tune, on another bowing a folksy melody.

He was a featured musician in the 2019 production of the Christmas Revels in Cambridge, MA.  Less recently, he played the role of bass player Joe B. Mauldin in the 5th Avenue Theatre production of Buddy: The Buddy Holly Story.  At The Ukeshack #1, an album of bass and ukulele duets with Del Rey, was released in 2007.